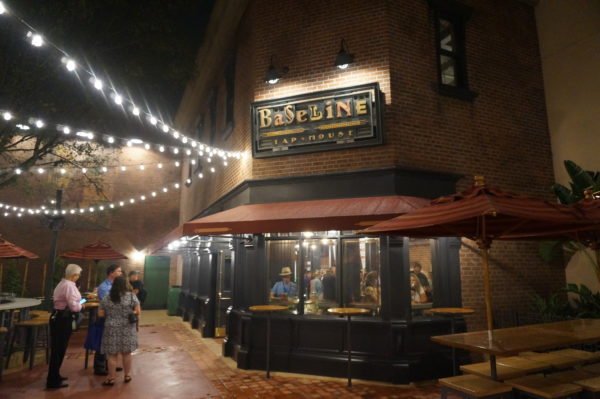 Inside the New Baseline Tap House at Disney’s Hollywood Studios

Disney’s Hollywood Studios has been in a mode of closings for a while, but now the tide is starting to turn.

Disney recently opened, or at least previewed, the new Baseline Tap House.   I had a chance to check it out, and I’m happy to share my impressions.

The Tap House is located in the new Grand Avenue section of the park – which is the old Muppet’s Courtyard, but with a facelift.

This area will likely act as both a buffer and a holding tank for the throngs of guests expected when the nearby Star Wars – Galaxy’s Edge opens.

The Baseline Tap House is a cozy bar in a brick building with lots of character. It represents current day downtown Los Angeles.

The location honors the Figueroa Printing Company, which was a small print shop that once worked with the early Disney Studios.

It’s not a big place.  There is both indoor and outdoor seating.

Here is what the Tap House offers:

However, as a tap house, you would expect – and will get – a large variety of beers on tap.

I had a chance to wander around the facility, and sample some of the food and drinks.

Overall, I really enjoyed the Tap House. It feels just a little hip (but not stuffy) and relaxed – a place where you could hang out with friends and chat for a while.  I think it will be a popular spot, especially as Disney drives more traffic to this back corner of the park with Star Wars.

Until then, it may be a quiet hidden gem that goes unnoticed buy many.  Be sure to check it out.