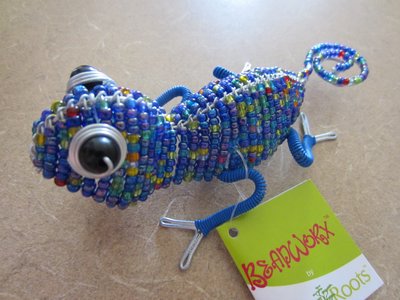 A good trend continues – Disney is adding more and more resort-specific merchandise and park-specific merchandise. This continues to reverse a trend of “all the stores have all the same generic stuff” that was sadly in vogue at Disney for a while as part of a standardization and cost-cutting efforts.

If you are like me, you can appreciate seeing standard Mickey Mouse and Minnie Mouse themed merchandise across many stores at Disney. That’s nice, but it’s not really enough. You also want a selection of items that are specifically tied into a resort or a park: perhaps a t-shirt that reads “Disney’s Wilderness Lodge” to take home after your stay there, or a custom light saber after your ride on Star Tours at Disney’s Hollywood Studios.

Want to win some merchandise from the Animal Kingdom?
Check out the entry instructions at the end of this article.

Many stores around the Animal Kingdom now carry more souvenirs that are specifically themed to animals, including the extensive Mombasa Marketplace shop in the Africa section of the park. Mombasa Marketplace is located in the back of the park, across from the Tusker House Restaurant and not far from the Kilimanjaro Safaris ride.

Let’s start off by looking at some of the clothing options. I think Disney is doing a nice job here, offering not just the t-shirts with the park logo (which are also available), but also offering modern t-shirt designs with clever graphics and text.

Disney also offers some clothing items that are a bit more upscale, including hats, scarves, and fancier shirts.

In addition to clothing, Disney offers art and home décor items, many of which are hand crafted in Africa and Asia.

Tin animals by Mbare are works of art made with metal by artisans in countries such as South Africa, Senegal, and Swaziland.

Would you like to win a blue Beadworx lizard – a little work of art directly from the Animal Kingdom? Just send an e-mail to me at info@worldofwalt.com. I’ll add you to our mailing list (if you aren’t already on it) and enter you into a drawing. I’ll then select a lucky winner on or around March 7, 2014. I’ll request your mailing address and then send a prize to you. It’s that easy! This give-away is open to everyone, everywhere.

Beadworx sculptures are handmade with contributions by at least two different artists.

These particular items are not really meant as toys, but instead as display pieces suitable for a curio cabinet, fireplace mantel, or bookshelf.

Would you like to win art by Beadworx from Animal Kingdom?