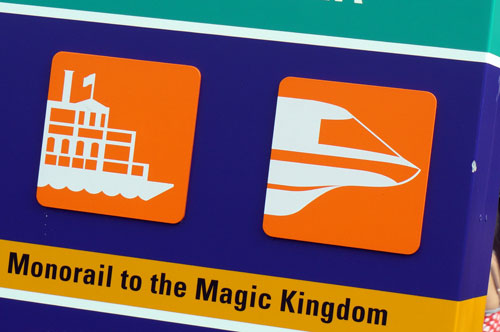 Walt Disney World is a city in itself. It has it’s own fire department, it’s own development district, and services its own utilities. It even grows some of the food used on property.

This massive area also has a very complex transportation system. With millions of visitors every year, many of which don’t have their own car, Disney had to figure out a way to quickly and efficiently transport them between parks, resorts, and entertainment districts.

However, this transportation system can be quite confusing – especially for new guests.  Even returning guests can get flustered.

Today, we’re going to look at the transportation system and discuss how to get around the huge resort.

First thing’s first. What kinds of transportation does Disney have to offer?

Disney owns and operates more than 300 buses. Buses travel to and from every location on property.

There are also non-Disney options including a rental car, an Uber, or a taxi. Those who use a rental car can use the parking lots at the hotels and parks while those who take an Uber or a taxi will be dropped off in close proximity to the Disney bus stops.

From Value and Moderate Resorts

Value and Moderate Resorts are almost exclusively serviced by the Disney buses. If you are going from a value or moderate resort to or from any park or water park, you’ll be taking a bus.

However, some moderate resorts including Port Orleans French Quarter and Port Orleans Riverside as well as Old Key West have ferry service to and from Disney Springs.

Deluxe Resorts have a larger variety of transportation options.

These resorts plus Disney’s Wilderness Lodge and Disney’s Fort Wilderness Resort and Campground guests can also take a ferry to Magic Kingdom.

Disney’s Animal Kingdom Lodge guests only have the option to use buses.

From Resort to Resort

Taking a taxi or Uber is undoubtedly the fastest and most efficient way to get from one resort to another regardless of the level or location of resort. If you have an Advanced Dining Reservation at a Disney Resort restaurant, you don’t want to risk being late.

If you don’t want to do a taxi or Uber, you do have the option of using Disney’s transportation. In this situation, you’ll have to take a bus, monorail, or ferry from your resort to a Disney Park. The easiest thing to do is get to the park closest to your destination resort. You can also take a bus to Disney Springs. Whichever intermediate location you choose, you’ll transfer to a second bus from there to your destination.

The exception to these rules involves Disney’s Fort Wilderness Resort. If that is your destination, get to the Magic Kingdom and take a boat to the resort.

If you’re trying to get to Disney Springs from a resort, you can take either a bus or a ferry if you’re staying at one of the resorts mentioned above. Until recently, there was no service between Disney Springs and the Disney Parks, but now you can get from any of the Disney theme parks to Disney Springs, but there is no return service at this point in time.

After the parks close for the evening, there will be a mad rush to any and all forms of transportation including taxis and Ubers. The trick here is to be one of the first to leave the park and thus one of the first to arrive at the bus stop. I love watching Happily Ever After from Main Street USA not only because it provides an excellent vantage point but also because I can quickly and easily leave Magic Kingdom and get to my chosen form of transportation. This also works with Epcot’s Illuminations: Reflections of Earth, but it doesn’t work well with Hollywood Studios’ Fantasmic! because its an amphitheater-type show.  Alternatively, hang back and let everyone else leave while you shop or just enjoy the parks as they empty.

The other option is to avoid the crowds in the parks all together and watch the fireworks from outside the parks. This only works with Happily Ever After and Illuminations. One of the best places to watch Happily Ever After, inside or outside of the park, is the beach of the Poly.

All forms of transportation run at least two hours after park closing.