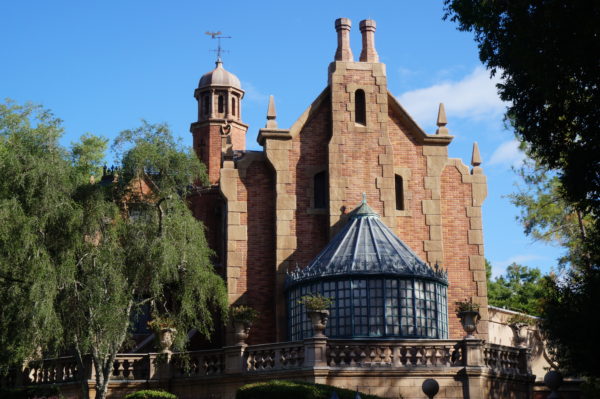 Liberty Square gets its inspiration from early America. Guests can see replicas of the Liberty Bell and the Liberty Tree, both symbols of Colonial America.

Liberty Square, while the smallest area of Magic Kingdom, packs a big punch. The 18th Century theming is obvious not only in the décor and architecture but also in the small details like the faux sewage-stained streets and antiques in the windows of the shops.

Liberty Square offers the opportunity to hear American presidents speak in The Hall of Presidents and sail the Rivers of America on the Liberty Belle Riverboat. My favorite attraction in this land, though, is The Haunted Mansion.

The Haunted Mansion is an omnimover dark ride located in Disneyland and Magic Kingdom. In fact, this was the first attraction to have ever been built simultaneously in two locations.

The Haunted Mansion was originally conceived as a walkthrough haunted house attraction with a deserted appearance both inside and outside. Walt Disney objected saying that a run-down building doesn’t belong in his well-kept park. After Walt visited a haunted house, though, he was intrigued and gave the project the go-ahead.

Construction started in 1963, and the exterior was completed within the year. However, Disney was busy working on projects for the 1964 World’s Fair. Then, after his sudden death in 1966, the project was halted. By this time, construction on Walt Disney World was well underway. Since the new park had more space than Disneyland did, Imagineers decided to not only build the same attraction in Disney World but to make it longer and more elaborate than the one in Disneyland. The Disneyland version was completed by 1969 and opened on August 9th.

While the project continued in Walt Disney World, the Imagineers needed somewhere to store their audio-animatronics, so they kept them in a warehouse. One night, janitors came in to clean and were frightened by what they saw. They requested that the Imagineers leave the lights on. They obliged but created a switch that, when tripped, would turn off the lights and turn on the animatronics. When they returned the next morning, all of the lights were off, the audio-animatronics were running, and there was a broom lying in the middle of the floor. They also received a message saying that the janitors would not be back.

The real attraction is much less scary and combines the frightening and the enjoyable as proposed by different Imagineers and combined together by X Atencio. The attraction was supposed to be a walk-through, but Imagineers warned that such an attraction would have low capacity. Instead, they made it an omnimover ride with vehicles called Doom Buggies. These Doom Buggies are partially enclosed and hold just two or three people, which contributes to the idea of “wandering alone through a haunted house”.

In addition to the fun ride vehicles, the Imagineers used a variety of technology including centuries-old tricks like Peppers Ghost and modern audio-animatronics.

The result was an opening-day attraction at Magic Kingdom and has remained incredibly popular in both Disney World and Disneyland’s New Orleans Square and in a similar version in Tokyo Disneyland’s Fantasyland.

The attraction has remained mostly unchanged in its nearly 50 years, but there have been some fun updates including character changes, the addition of PhotoPass+, and a new, interactive queue in 2011 that includes interactive crypts and tombstones honoring Imagineers who worked on the project. At the same time, busts of the Dread Family were also added along with a murder mystery for guests to solve.

One thing that has remained the same for 50 years is that, while there are 999 happy haunts, there’s always room for one more!