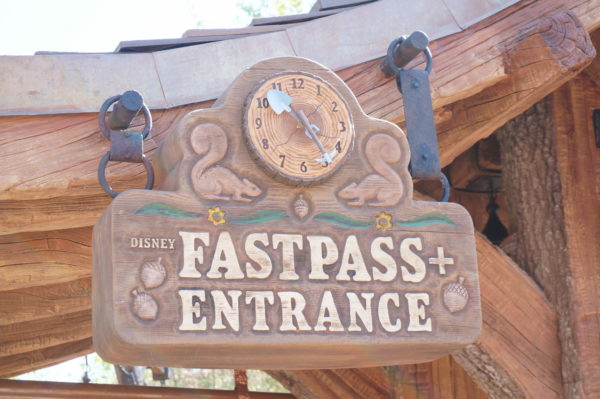 Top Twelve Must Have FastPasses at Disney World

Disney’s FastPass is a virtual queuing system that allows guests to virtually hold their place in line for the most popular attractions. FastPass reduces the wait time for those who participate.

Disney World’s FastPass is a bit different from the other Disney Parks. It’s called FastPass+ and the passes are linked to guests’ MagicBands instead of using paper tickets. This means that Disney World guests can reserve FastPass times well in advance of their vacations whereas other parks require guests to visit each attraction on the day of and pick up a paper ticket with a return time.

Since the Disney World FastPass+ system is so much more convenient and is available ahead of time, it seems that the Disney World attractions with FastPasses can sell out much faster. Some are next to impossible to get!

Let’s take a look at the top twelve must have FastPasses in Disney World.

Big Thunder Mountain Railroad, in Magic Kingdom‘s Frontierland, is “The Wildest Ride in the Wilderness!” It’s a great family ride, and even though it is a rollercoaster, it’s gentle enough for even young kids who are at least 40 inches tall.

There are other FP+ attractions in Magic Kingdom that may have longer lines, but since Big Thunder Mountain’s line is mostly outdoors with only partial shade, it’s a good ride for FastPass.

Star Tours in Disney’s Hollywood Studios has been delighting Star Wars fans for almost three decades, but it is still popular and can sometimes have long wait times.

This 3D attraction is a good family ride with a low thrill level as long as you can stomach it’s 3D-ness. The theater has a relatively high capacity at 40 riders per vehicle, but the almost five minute show means the line can take a while.

The Twilight Zone Tower of Terror, also at Hollywood Studios reflects the theme of the Twilight Zone television series. The attraction simulates an elevator free fall that provides a feeling of weightlessness. While the height requirement for this attraction is 40 inches or taller, it is quite a thrilling ride with big drops, dark scenes, and scary effects. Regardless, thrill seekers love it, so the lines can get pretty long.

Rock ‘n’ Rollercoaster featuring Aerosmith is just off of Sunset Blvd also in Hollywood Studios. While so many things are closing to make way for Galaxy’s Edge and Toy Story Land, these couple attractions outside of these areas are holding their own. Wait times for Rock ‘n’ Rollercoaster can reach well over an hour, and for good reason.

The attraction, which has a 48 inch height requirement, is exciting, loud, and the only attraction that features not one but three inversions and a force of 5g. The queue line inside has a lot to look at, but there’s not a lot to do so a FastPass is a good idea.

Expedition Everest in Disney’s Animal Kingdom is the only rollercoaster in the park. With a forward then backward-going ride vehicle, it’s almost as thrilling as Rock ‘n’ Rollercoaster. Again, most of the queue line is outdoors, so being able to skip the long line is a welcome relief. However, don’t rush through the line too quickly. If you’ve never explored the queue before, take some time to do so and you’ll see artifacts (some real and some created) of the evidence of a Yeti’s existence around Mount Everest in Nepal.

Test Track in Epcot‘s Future World is a favorite of many guests. The attraction allows guests to build their own sim-car then test it in a variety of environments. This is a very exciting attraction especially when the car does the speed test at the end, but the 40 inch height minimum reflects the fact that it is very much a family attraction. The car’s seats sit very low in the ride vehicles, and even small children will feel secure inside. Plus, they’ll love seeing how their car stacks up against the other riders’ cars.

With such a wide level of appeal and a relatively low capacity (6 people per car) Test Track’s lines can get very long. I highly recommend getting a FastPass for this attraction.

Toy Story Mania is a midway style arcade game during which you can compete against other riders. It’s also 3D. This is a hugely popular attraction, and unless you can get to the park at rope drop and head straight here, you’re going to have a very long wait.

With no height requirement and a low thrill level, every member of the family will love this attraction making it the perfect FastPass ride!

Peter Pan’s Flight is a dark ride in Magic Kingdom’s Fantasyland. It was an opening day attraction and has been popular since then. This attraction is fun and family friendly. It seems insignificant, but I promise adults will enjoy it just as much as the kids. I’m always pleasantly surprised when I ride just how much fun it actually is.

Because of this, it consistently commands a wait time of 60 minutes or more on busy days and anywhere from 15 to 45 minutes on slower days.

Splash Mountain is right next door to Big Thunder Mountain. Despite it’s connection to the Song of the South movie, it’s a very popular attraction with some catchy tunes.

If you can get here first thing in the morning, you will likely be able to ride a couple times before the line gets too long. However, if you wait until mid-day or afternoon, the wait will likely be around an hour.

Frozen Ever After opened in the Norway Pavilion in World Showcase in 2016, and from the time that it opened has had the reputation of incredibly long lines. In fact, since Frozen came out in 2013, Anna and Elsa have been one of the hottest commodities in Disney World. People waited literally hours just to meet the sisters and then up to three or four hours to ride the attraction, which replaced Maelstrom.

Today, even after the Frozen frenzy has been quelled a bit, wait times are still frequently over an hour. If you have a Frozen fan in your family, you’ll definitely want a FastPass for Frozen Ever After.

Seven Dwarfs Mine Train was part of the New Fantasyland expansion in Magic Kingdom in 2014. When it opened, getting a FastPass was nearly impossible. It’s no surprise since this very exciting rollercoaster in Magic Kingdom is one of the only coasters in the park. It has a very smooth ride since the cars have a bit of a swaying motion as they go around the twists and turns of the mine.

With a 38 inch height requirement, it’s one of the few more thrilling attractions that are appropriate for even the youngest members of the family. Whether you think your child is ready for a big kid coaster or you already know and love this attraction, you’re going to want a FastPass to avoid waiting more than an hour to ride.

Flight of Passage is part of the new Pandora: The World of Avatar land in Disney’s Animal Kingdom. The land is beautiful and the attractions are some of the most technical that Disney’s Imagineers have come up with yet.

Flight of Passage allows us humans to experience what it’s like to bond with a banshee and soar through the forests of Pandora. There is nothing like it anywhere else in the world, so it’s only right that the wait times would be upwards of 80 minutes. While there’s only one other attraction in the tier, your decision won’t be difficult; however, choosing Flight of Passage means you’ll have to stand in line for the Na’vi River Journey which has shorter, though not by much, wait times.

Which FastPass+ is a must-have during your vacation?