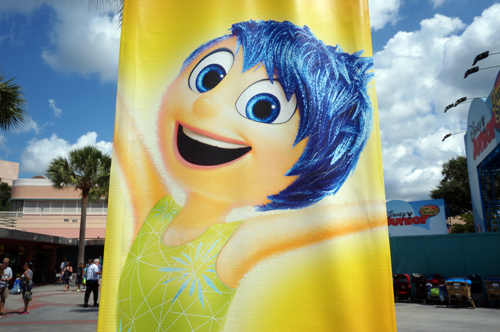 Movie Review: Disney Pixar – Inside Out

On June 19th, 2015, Disney Pixar released an animated film about a young girl and her many emotions and personalities. Like other Disney Pixar films, this movie was an original idea that is enjoyable for the whole family. The kids will love the colorful details and fun characters, while the adults will likely leave the theater in tears. Don’t forget your Kleenexes!

Inside Out received rave reviews including how it “explores existential crises” in a “beautiful, meaningful, and deeply touching film.” It’s obvious that movie goers agreed since the opening grossed over $90.5 million. As of June 2015, the movie had earned over $192 million.

Inside Out begins at Riley’s (Kaitlyn Dias) birth. Her first emotion is Joy (Amy Poehler), but she soon feels Sadness (Phyllis Smith) and starts to cry. Joy returns quickly, though, and remains the overarching emotion throughout most of her childhood.

As Riley grows, new emotions including Fear (Bill Hader), Anger (Lewis Black), and Disgust (Mindy Kaling) arrive. These are first obvious when Riley is a toddler. Fear keeps her safe while playing in the house, and Disgust evaluates the potential gross factor of broccoli. Joy soon takes over when Dad (Kyle McLauchlan) brings on the “airplane” spoon maneuver.

When Riley is 11 years old, her parents move the family from Minnesota to San Francisco for her dad’s business. The move doesn’t go as well as Joy had hoped, and the other emotions start taking over. Even though the moving truck is several days late, Joy is committed to making the best of the situation and makes Riley start an impromptu hockey game in the new living room with the fireplace as the goal. When Dad gets a business call, Sadness steps up and doesn’t want him to leave. Joy regains control, and Riley suggests that she and her Mom (Diane Lane) go for a slice of pizza. This too doesn’t go well, and Anger declares that California has “ruined pizza.”

Joy and Sadness find themselves in Long-term Memory- a huge maze- and Sadness says, “You could get lost in there.” Joy at first tries to cross Goofball Island, one of Riley’s personalities, but the island crumbles when her dad can’t get her to goof around. Joy is determined, and she starts dragging Sadness while carrying all of the core memories through the maze. Since Sadness has read the mind manuals, she tries to direct Joy, but she is so sad that she has a hard time remembering which way to go. The two enter the maze, and an adventure ensues.

Since Joy is no longer in headquarters, Riley is incapable of feeling happiness, and all of her personality islands shut down. In effect, she ceases to be herself.  Riley’s parents start to ask questions about the first day of school. She becomes moody and doesn’t know why. This is the first glimpse of Mom’s and Dad’s emotions.

Meanwhile, Joy and Sadness are making their way through Long-term Memory, and they meet a funny character named Bing Bong (Richard Kind), Riley’s childhood imaginary friend. He realizes how important it is for Joy to return to headquarters, so he vows to help. The threesome set off through the lands of Riley’s memory including Imagination Island, Preschool World, Abstract thought, and Dream World on their way to the train of thought. They board the train, but it soon shuts down when Riley does to sleep. The engineers report that they’re going on break because the train doesn’t run when Riley is sleeping.

Joy, Sadness, and Bing Bong decide that they must wake Riley up. Joy suggests taking over a dream and making her laugh, but Sadness thinks it would be easier to wake her through a scary dream. When Riley is awoken by a clown nightmare, Anger becomes frustrated that he can’t get any sleep with Fear at the controls. He decides that Joy is never coming back and Riley can’t function without her core memories, so he must get her back to Minnesota to make more happy memories. Riley books a bus trip, and steals her Mom’s credit card to pay for it sending Honesty Island into the dumps.  When Riley sets off to the bus station she refuses to answer her parents’ phone calls, Family Island crumbles, too.

Finally, Joy, Sadness, and Bing Bong board the train of thought, but the train derails sending Joy and Bing Bong into the memory dump as Sadness tries and fails to catch them. The pair use Bing Bong’s wagon rocket ship to launch themselves back into Long-term Memory, but after two failed attempts, Bing Bong decides to jump out on the third try so Joy isn’t weighed down. She makes it back, and she uses Riley’s Imaginary Boyfriends to create a tower to launch her back to headquarters. Sadness flies on a cloud.

Back in headquarters, Fear scares Riley and forces her to get off of the bus. Joy and Sadness arrive back in headquarters just in time, and Joy tells Sadness to take the controls. When Riley arrives back home, Sadness allows her to honestly tell her parents that she misses home. The islands of her personality are restored as she is honest with her family, joins a hockey team in San Francisco, and makes new friends; new islands are formed creating even more parts of her personality. New core memories are formed combining all of the emotions.

The movie ends with headquarters getting an upgraded console with new buttons for each emotion including puberty for Disgust and expanded vocabulary for Anger.

Some of the concepts of this movie might be better suited for more mature audiences since the dialogue requires at least an elementary understanding of psychology and many younger children will have a hard time comprehending the underlying elements of emotion.

I think the value of this movie is that the whole family will be able to identify and discuss the different kinds of emotions. Parents might use this movie to open the lines of communication with all ages of children making it acceptable to express feelings in a world where this is often considered weak and unnecessary.

It’s also important to note how the emotions grew throughout the movie. Joy appeared as a glowing character, but her aura grew and became more fragmented as she established an understanding of Sadness, who appears blue throughout the movie (representing the expression of being “blue” or sad). Fear seems to change the least; perhaps the writers are trying to show us that, although Fear is a real emotion, it is rooted in childhood emotions. Anger is always a hot head (with fire literally shooting out of his head), but he seems to get even angrier as the movie progresses. Perhaps Disgust transitions the most. At first, she and fear are pretty similar in their reactions to broccoli. Later, Disgust becomes somewhat of a fashion diva reflecting Riley becoming a teenager.

By the end of the movie, the emotions are creating memories together signifying that adults can create happy memories through sadness, sad memories with joy, feel fear and anger together, etc.

Whether you are visiting with young children, teenagers, grandchildren, or with other adults, Inside Out is a cute movie with super attention to detail and many take-away morals that I’m sure you will enjoy.

Disney Pixar’s Inside Out movie – thumbs up or thumbs down?
Leave your comments below.