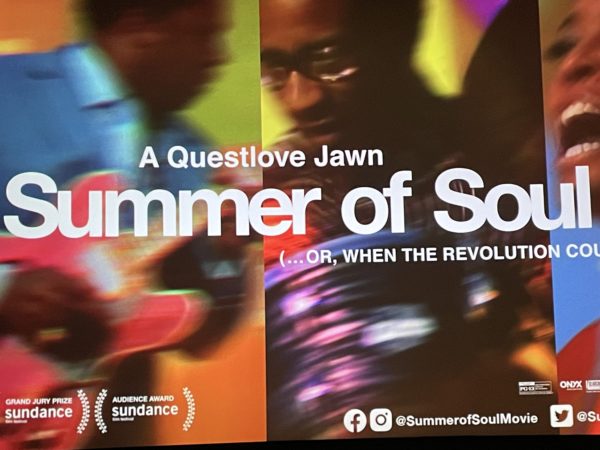 It was the late 1960’s, and the United States was changing.  John Kennedy and Martin Luther King were assassinated.  Man landed on the moon.  Riots rocked the nation.  Woodstock took place on a dairy farm.  And the Harlem Culture Festival happened in Harlem in 1969.

Never heard of the Harlem Culture Festival?  Neither had I.

A new film by Disney’s Searchlight Pictures called “Summer of Soul (…Or, When the Revolution Could Not Be Televised)” covers the Harlem Festival that was both a major event and a forgotten event.  The director put the film together from 40 hours of footage that were filmed during the festival.  However, the film eventually landed in a basement, undeveloped, and unwatched.  Nobody was interested in the story.

Now, the story is out.

Directed by Ahmir “Questlove” Thompson (leader of The Tonight Show’s house band, The Roots), this documentary takes an in-depth look at the 1969 Harlem Cultural Festival.

The music draws you in with high energy and various styles, from gospel to pop to psychedelic.  It informs the story of the artists, the people in attendance, and the changes happening in the country.  Along the way, we get a window into a fascinating period in US history as well as changes in music and culture.

As I watched the film, courtesy of the nice folks at Disney Media Relations, I couldn’t help but smile at Stevie Wonder, be inspired by The Edwin Hawkins Singers (“Oh Happy Day”), and ponder all the changes that were – and in many cases still are – happening in our country.

I highly recommend you check it out.

The film premiered in January 2021 at the Sundance Film Festival.  It won the Audience Award and the Grand Jury Prize. It has a 98% freshness rating on Rotten Tomatoes.

The film is available in theaters and on Hulu now and will be distributed internationally in theaters, on Disney+, and on the streaming service Star+ later in 2021.

Will you see Summer of Soul?