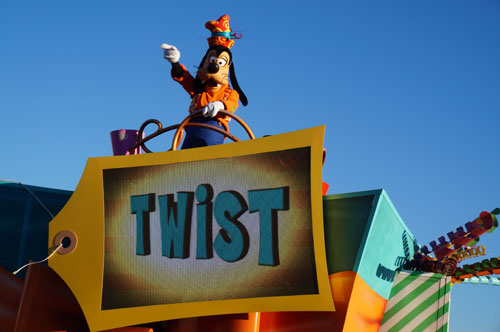 Move It, Shake It, Dance and Play It Parade Premiers at the Magic Kingdom

Disney has been playing the original “Move It! Shake It! Celebrate It!” Street Party since 2009. That parade has faithfully made its way up Main Street USA to the Cinderella Castle Hub most days where it parks, plays music, and entertains guests who can dance along with their favorite characters.

Disney recently gave the Street Party a minor facelift. The new version of this street party debuted on Friday, October 24, 2014.

Many of the things you know and love about the Street Party are still there: fun modern music, colorful parade floats, energetic dancers, and plenty of time to boogie with your favorite Disney characters.

However, Disney changed some things as well.

First, the parade has a new name: Move It, Shake It, Dance and Play It.

Disney changed up the characters a bit. Gone are the Genie and Sebastian from “Aladdin,” the Mad Hatter from “Alice in Wonderland,” and Lumiere from “Beauty and the Beast.” Phineas, Ferb, and Stitch join the fun.

Disney moved the popular, classic characters to the top of the parade floats. I’m not sure if people were monopolizing Mickey’s time when he was at street level, but now he, Minnie, Donald, and Goofy all hang out on top of the floats. Everyone can see them, but they are a bit more removed from the fun.

1 – Disney displays animated song lyrics on the screens. These add some extra motion and color to the event.

2 – Disney played up the “interactive” nature of the parade. They promised that guests would be able to help choose one of the final songs for the parade. I wondered how they would do that: text in your choice, use the Disney mobile app, or maybe somehow use MagicBands? The final answer was much more low-tech: The DJ simply asks people to cheer for one of these song choices, and then he plays that choice based on the song that gets the most support.

3 – In a high-tech move, people in the crowd can mark their photos with a special hash tag. Disney selects photos and displays them on the giant screens on the parade floats.

While much of what makes the Street Party fun is unchanged, the new additions are welcome. I think the new video screens add some extra fun and motion to the parade. Many folks were very excited to see their selfies show up on the big screens.

Do you like the new video screens in the Street Party parade?