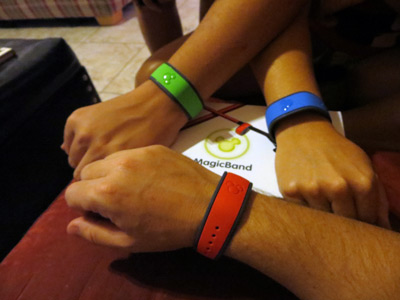 More NextGen Feedback From Someone Who Actually Used It

When you mention NextGen (also known as FastPass+, My Disney Experience, or “RIFD” based on the radio technology that is behind the roll out), you get many different responses.

Some people are looking forward to the new technology; or they expect that Disney will do a good job with improving customer service, as they usually do.

Other folks are not so excited.  They think that FastPass+ will remove the fun or “magic” from their Disney vacation since there are more opportunities for pre-planning.  They worry that the most popular attractions will become even harder to experience when the planners among us snatch up reservations weeks or months in advance, leaving no spots for day-trippers;  and they wonder how all this will work for annual pass holders.

We still don’t have answers to many questions, even after Disney’s chairman shared some updates.

But we do have this interview with Shelly.  She and her family recently visited the Walt Disney World Resort, and they know something about NextGen that most of us don’t.  What’s that? They know what it is really like because they tried it.

Let’s hear from Shelly about her experience with NextGen:

Question: Tell me about your trip, when did you go, and where did you stay?

Answer: We visited and stayed at Animal Kingdom Lodge from Friday, August 9 through Sunday, August 11, 2013, and visited one park each day for a few hours: Hollywood Studios, Magic Kingdom, Animal Kingdom.

Answer: The first I heard about it was from simply logging onto My Disney Experience (the Disney planning web site) to check on a dining reservation. A window popped up saying we could customize our MagicBands and begin making FastPass reservations. I could pick out colors and name each Band by family member (names appear on skin side of band, opposite Mickey Mouse icon), and could start making reservations with our trip dates and beyond. That was on a Thursday night, the Bands arrived via FedEx on Monday. Later that day I received the first email alerting us to participate in testing. Tuesday evening, a UPS letter arrived saying essentially the same as the email.

Question: How did the testing process work? Did you get a MagicBand? Did you use your mobile phone?

Answer: As stated above, we received the MagicBands by mail. They were active for park admission immediately as long as our pass holder information was already in the My Disney Experience. I did have to enter our RFID card numbers into that portion of the website even though our old passes had already been in the system, and the Bands showed up already linked to us once they arrived. At the hotel, we were given the option of linking a credit card, just like guests do when they activate room key for charging. We were allowed to choose a pin number (same for all family members), and we told the credit info would only be active for our length of stay on property. We used both our mobile phones (iPhones) and an iPad.

Answer: We experienced no issues or problems with the use of the MagicBands at all. They worked more or less flawlessly as room keys, for charging, and for FastPasses. I liked that each time you entered a FastPass area, the cast member could greet us each by name as each area had a computer screen or tablet device and as we tapped our Band to the Mickey stand, our name and a checkmark showed up on those screens. Could be a bit creepy, but this is the social media, digital age, and it’s not too much different than wearing a birthday button and having them greet you that way. I also liked that when the FastPasses are reserved, the computer gives four options for an overall time slot (morning, afternoon, evening, late night) and schedules the passes in a manner that they are back to back so guests do not have to stay an entire day from open to close to use the service.

Question: What did you not like about the test?

Answer: The MagicBands are rubber, and can get a little uncomfortable in the Florida heat over a couple hours of wear. While I initially liked the pre-planning to guarantee favorite rides (think Toy Story Mania), we found, at Magic Kingdom, the rides we had chosen had low wait times when we were there, and we would have been better off choosing different rides with longer waits. I suppose this will always be a potential problem with not being immediately onsite to make these decisions, but at least you know you will for sure get on favorites. I considered going on to the app and changing, but feared if I gave up what we already had and tried to choose new experiences we would end up waiting longer to use the FastPasses like if we walked up to get them in park. We did not consider trying to insert our RFID cards to see if we could generate another pass.

Question: How do you think this will impact people who visit Disney World in the future?

Answer: Like any new technology, there will be pros and cons and kinks to work out. I know people’s biggest concern is spontaneity being taken away with the pre-planning. This will be a wait and see thing I think. I would wager that it will depend on time of year and crowd size just as it does now. I do like that, if needed, we can plan ahead. I can’t remember the last time we were at Hollywood Studios early enough to get a Toy Story FastPass and this trip we could show up at noon and get on the ride. I’m taking my son on Monday before his school starts and have already scheduled Test Track and Soarin for early afternoon…rides that typically are hit or miss for us lately. The people who are spontaneous visitors are typically pass holders and have surely been in the same boat of sometimes getting FastPasses and sometimes not based on time of day. We go frequently and if we get on a ride that day, great, if not, oh well, there’s always next time!

Question: Any other information that might be of interest?

Answer: We did drive to the parks despite staying on property because we find this easier and faster than the buses and I did see a sign in the parking attendant booth saying that they were to give free parking to any guest with a band. We had the parking pass from the hotel and are annual passholders, so this didn’t matter much to us, but I imagine, if you kept a band beyond the length of stay, it could be used for parking privileges. Also, the MagicBands are waterproof, I wore mine swimming the last night just to see and it worked perfectly to get back in the room.

Question: What happened when an experience you had scheduled was down?

Answer: We went to Epcot and had pre-scheduled FastPass+ reservations for rides that we made a couple weeks ago.  When the time came for our Test Track FastPass+, we went over to the ride and discovered it was temporarily closed.  An announcement was made that those holding FastPasses would be able to return later in the day and the passes would be honored.  I asked a cast member if the MagicBands would also work later in the day, but two different people could only tell me to consult the My Disney Experience app (or go to an on-site kiosk), and there would be a notification and I could reschedule or change it there.  I pulled up the app, but there was no notification and I could not change the reservation for a later time as all FastPasses had been distributed for the day.  We thought, no big deal, we’re there all the time, and I figured if we did go back later they would probably let us through regardless if the system worked since Disney generally wants to please the guest.  About a half hour into our FastPass+ time, I did receive an email that stated we could go on several alternative attractions during the same time window, and without any further action needed.  We went back to Test Track an hour after our passes expired and had no problem at all with the entrance to the attraction.  An added tidbit we picked up was that the MagicBands work in place of the white Test Track RFID cards guests are normally given on the ride for the car design portion.

Now that you’ve heard from someone who tried NextGen, has your opinion about it changed?