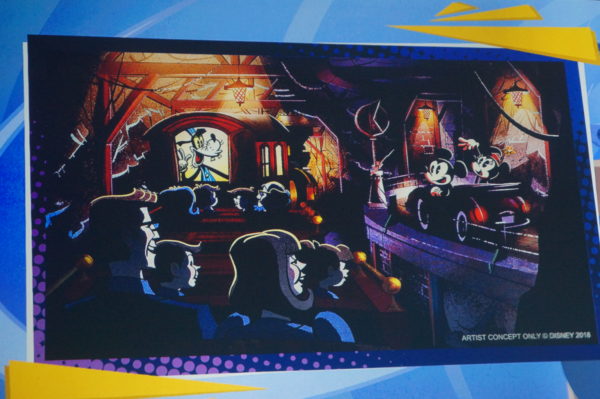 Disney recently hosted a D23 Destination D event. While they didn’t announce anything that was really big news, they did confirm much of the speculation that existed for coming attractions.

One such attraction was Mickey and Minnie’s Runaway Railway, which was confirmed last year when it was announced that The Great Movie Ride would be closing.

It should come as no surprise that Mickey and Minnie’s Runaway Railway will be located inside the Chinese Theater. We assumed this because that’s where Great Movie Ride was located, but Disney revealed a very special connection between Mickey and his first ride-through attraction.

In 1931, “Mickey Steps Out”, a Mickey cartoon, premiered inside the real Chinese Theater in Los Angeles, California.

His home inside the replica theater inside Disney’s Hollywood Studios is both historical and appropriate.

Also confirmed, as expected based on the early concept art: Goofy will be conducting the train!

Many Disney attractions have a show before the show, and Mickey and Minnie’s Runaway Railway will have a new short called “Mickey Mouse in a Perfect Picnic”.

The animated film will set the scene for the ride.

The ride vehicles of Runaway Railway will be one of the boldest things Disney Imagineers have ever attempted. In fact, Disney had to invent a new technology to turn 3D images into something that looks 2D.

Most of this technology will be used on the ride vehicles. The 3D trains will be painted to appear 2D in the cartoons, but the paint will also use a method that allows them to appear appropriately in white or black light.

The sound effects used in Mickey and Minnie’s Runaway Railway will be very authentic: Imagineers Charita Carter and Kevin Rafferty worked to create all of the effects from real Foley sound props, and they were recorded in a studio instead of produced digitally.

To contribute to the authenticity, the whistle on the locomotive was produced using the same slide whistle used in the 1928 famous Mickey short, Steamboat Willie.  That, my friends, is very cool.

The sound effects pay tribute to Jimmy MacDonald, who was the original head of the Disney Sound Effects Department and helped create the sound effects for the Casey Jr. Circus Train.

Like the sound effects, Disney is looking to a Disney legend and creating the music organically instead of digitally.

Robert Sherman, part of the Sherman brothers pair, suggested that the music should be “singable, simple, and sincere.”

Following that, Chris Willis, who composed the music for many Mickey shorts, assembled a 65-piece orchestra in Hollywood to record the music for the attraction.