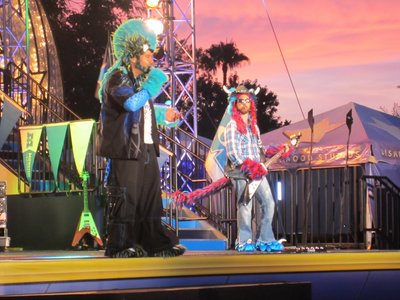 As part of the lead up to the June 21, 2013 opening of the Monsters University movie in the US, Disney has been busy promoting the film.

As part of Limited Time Magic, there is a Monsters University Homecoming bash in front of the Sorcerer’s Hat on Hollywood Blvd in Disney’s Hollywood Studios.

The Studio’s rock band called Mulch, Sweat, and Shears becomes Scare Supply for the evening. However, this is not a band playing the music of the soft rock duo “Air Supply” that you might remember – it’s all rock n roll.

There is also a chance to play some bag-toss games, which seemed to be pretty popular.

Let’s take a look at some pictures and a video of the event.


Video highlights of the DJ and Scare Supply band.

What do you think about the Monsters University Homecoming?