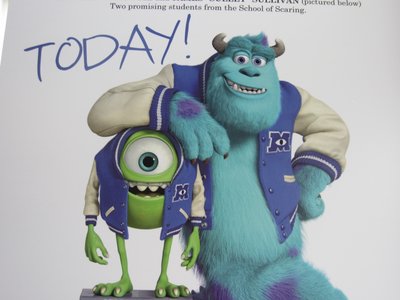 The characters of Monsters Inc. have been showing up all over the Walt Disney World Resort recently as part of the company’s overall promotion of the new Monsters University movie’s opening on June 21, 2013 in the US.

Then, on May 24-25, 2013 the Magic Kingdom stayed open for 24 hours straight to celebrate the kick off of the summer season, and Monsters merchandise and food offerings were everywhere .

Now, you can meet Mike and Sully in person at Disney’s Hollywood Studios.

A spot in the backlot area, across from the Across from Studio Catering Co., has been turned into the Monsters University Student Union. Here are lots of great monsters-meet-school themed items to keep you occupied as you wait in line to meet the characters.