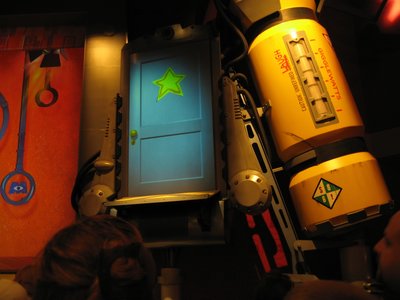 The Monsters, Inc. Laugh Floor is located in the Tomorrowland area of Walt Disney World’s Magic Kingdom. Housed in a 400-seat theater, the attraction is a family-friendly show of standup comedy that takes its inspiration from the Pixar film “Monsters, Inc.”. The show utilizes digital puppetry that makes each performance unique and gives the audience the opportunity to actually interact with the characters in the show.

Hosted by green Cyclops Mike Wazowski, a series of monster comedians performs for the audience to collect laughs for their laughometer. The jokes are mostly silly and corny – definitely designed to appeal to children. And while adults may not be laughing quite as much, they are more likely to be awed by the impressive technology employed to make the characters come to life.

For many years, the only characters that visitors to Disney theme parks could interact with were the actors in character costumes and foam heads that have been around for decades. While these characters have become a classic part of the Disney park experience, there are many limitations and drawbacks to these interactions. Most of the foam-headed characters do not speak (although that will likely change in the future), largely because their voices are so distinctive. And while Disney does its utmost with costuming and make-up, the resemblance between these live characters and their animated counterparts is never perfect – especially for alien features like Mike Wazowski.

Disney has recently begun to experiment with new ways of creating real life interactions with visitors and Disney characters.  These experiments are known by the title “Living Character Initiative“. One method is the use of a kind of remote audio animatronics that allows robotic characters to move and speak while being controlled by operators a large distance away. Another method of real-time interactions is digital puppetry, an animation technique that allows animated characters to appear in their original animated forms while interacting with Disney guests.

Digital puppetry is technology that allows the actions of an object or person to be rendered instantly by a computer. The 2001 film “The Lord of the Rings: The Fellowship of the Ring” used this technology to digitally capture the performances of actors and create animated characters such as the cave troll and Gollum. For several Disney theme parks, Walt Disney Imagineering uses similar motion capture techniques to display animated characters “live” onscreen.

Turtle Talk with Crush at Epcot and the Monsters, Inc. Laugh Floor are two of the pioneering efforts in digital puppetry at Disney theme parks. These shows employ live actors who are able to see and hear the audience while having their movements and voices broadcast via motion capture and instant computer rendering. The Monsters, Inc. Laugh Floor officially debuted in 2007, and was given an award for Outstanding Visual Effects in a Special Venue Project by the Visual Effects Society in 2008.

The Story of the Monsters, Inc. Laugh Floor

During the course of the “Monsters, Inc” film, the monster residents of Monstropolis – who use children’s screams to power their city – discover that the laughter of children is an even more powerful source of energy. The monsters who used to hide in closets to scare kids now to their best to make them laugh. Little green funnyman – er, funnymonster – Mike Wazowski has the idea to create a comedy club where they can entertain human children and capture a huge number of laughs at once. Hence, the Monsters, Inc. Laugh Floor was founded.

Visitors are invited to pass into the world of Monstropolis for the duration of the show, where they will enjoy the comic stylings of some of the monster city’s best comedians. Mike Wazowski serves as the emcee for the performances, while guests also see a bit of crotchety manager Roz, who is doubtful that the comedy club will be a success. These two are the only characters from the film to appear.

Like a true comedy club, the routines at Monsters, Inc. Laugh Floor are unscripted, and each performance is a little bit different. The comedians who appear have their standard routines and jokes, but each adds a little bit of improvisation and interaction with the audience in order to make the performance unique and special.

One standard feature of the show is an invitation for the audience to text their favorite joke to the performers. In the pre-show area, a video provides a text messaging password for guests to use to submit their joke. If possible, Mike Wazowski himself will work some of the jokes into his closing performance.

Another regular component of the Laugh Floor is the cameras that display guests on the screen and provide various humorous captions that poke gentle fun them. This segment serves as a bit of entertaining filler while guests file into the theatre and find their seats. The performers will also regularly talk with audience members with the help of Disney cast members who roam the audience with microphones.

Who Will Enjoy the Monsters, Inc Laugh Floor?

In a word: everybody. This is a show appropriate for all ages, and likely to entertain everyone who shows up in one way or another. The kids will laugh at the silly jokes and gags, and be delighted when Mike Wazowski actually talks to them. Adults who don’t find themselves thrilled by the corny humor can ooh and ahh at the Laugh Floor as a technical achievement, and wonder, “how did they DO that?”

The Monsters, Inc Laugh Floor has a couple of other advantages as well for the savvy Disney World guest. For one, the waits for this attraction are rarely long since the large auditorium can seat 400 people at once. The show only last about 12 minutes, and it is rare to have to wait for more than one show to end before getting a seat. Experienced visitors also recognize that shows at Disney World are not simply a source of entertainment – they are a way to get off your feet and out of the heat. At the Laugh Floor you can escape into an air conditioned environment without having to worry that the kids will be frightened by any of the show’s components.