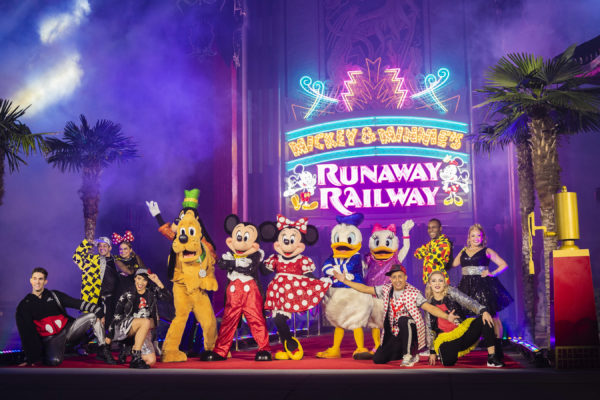 Mickey & Minnie’s Runaway Railway officially opens today March 4th, but I got to preview the attraction yesterday thanks to the nice folks at Disney Media Relations!

Mickey & Minnie’s Runaway Railway was announced at the D23 Expo in July, 2017. It is one of the many changes that Disney World has experienced recently especially in Disney’s Hollywood Studios where Star Wars: Galaxy’s Edge has been the main draw.

But step aside, Stormtroopers, because the Mouse is in the House!

Mickey & Minnie’s Runaway Railway is Disney’s newest attraction located in the Chinese Theater. With an unobstructed view down Hollywood Boulevard, the Chinese Theater is front and center of the park, which means Mickey is now too!

This theater held The Great Movie Ride until TCL contract ended and the ride closed permanently on August 13th, 2017. Many Disney fans were heartbroken that such a classic was being removed, but I think you will be pleasantly surprised by how much you enjoy this new attraction!

Interestingly, while the inside of the theater has been completely renovated, the outside remains largely unchanged. In fact, Disney World’s version is a replica of the TCL Chinese Theater located in Hollywood, so maintaining the exterior adds authenticity to the park as a whole.

Despite the fact that Mickey is Disney’s bread and butter, Mickey & Minnie’s Runaway Railway is the first ride in a Disney park to star Mickey and his friends. In fact, the cast includes all of the Fab 5 characters plus Pluto!

One of my favorite aspects of Mickey & Minnie’s Runaway Railway is that you get the 3D effects without the 3D glasses! The effect is called 2½-D. You really feel like you are in the middle of a crazy cartoon!

Imagineers who worked on the project say that it is bold, impossible, and game-changing. Runaway Railway also features the most technologically advanced projection Disney has ever used. Add on that this is a dark ride with bright, colorful effects and trackless ride vehicles and that there are no height restrictions, and this is going to be a new favorite attraction for the whole family! There are so many incredible details that you’ll have to ride over and over again to see everything- including more Hidden Mickeys than any other attraction!

One thing that sets this attraction apart from other recently opened attractions is that FP+ is available (as opposed to a virtual queue), but they are going fast!

Mickey Mouse shorts first debuted in the original Chinese theater. In 1931, “Mickey Steps Out” premiered in the theater, so this is a full-circle kind of thing for Disney and their main mouse!

The Queue takes you back to the original Chinese theater. You really feel like you go back in time to a day when Walt was creating Mickey shorts. In fact, the story is that all Mickey shorts have always premiered in this theater the latest of which is Perfect Picnic!

The show starts with two pre-show theaters. Both theaters are identical, but having two of them increases capacity. The pre-show features Mickey and Minnie in an animated short called “Perfect Picnic”. Unfortunately, things quickly go awry. Mickey and Minnie are preparing for their picnic when Goofy appears as a train conductor. Pluto, who is stuck in the trunk, breaks free and throws a pie out of the trunk with him. The pie gets stuck in the train’s stack and causes Goofy to lose control. Goofy wrecks his train into a barn and blows a hole into the side, which is actually a projection screen.

Guests pass through the screen and into the loading area. The effect reminds me very much of when Donald Duck blasts through the back wall of Mickey’s Philharmagic.

The loading area has a barn theme. The ride vehicles, which look like train cars, have a large capacity with eight rows per vehicle and four guests per row for a total of 32 people in one ride vehicle, which is actually separated into four individual cars.

The loading process is quick and easy. While this is not an omnimover but a trackless ride vehicle, it loads very quickly and keeps things moving.

Soon, you’re off into the Mouse world!

You first find yourself a passenger on Goofy’s train. A really cool effect here is when Goofy opens the window of the train and looks out at the guests. It is done perfectly and looks very real! You also see audio-animatronic versions of Mickey and Minnie for the first time; they drive by in their sports car, and they have the cutest animated faces you’ve ever seen! Uh-oh! Mickey accidentally hits the track switch and Goofy’s train separates from the cars. Your trackless ride vehicle is suddenly out of control!

You end up in a western-themed room. Don’t worry, folks! Mickey and Minnie have commandeered some horses to rescue you, but – oh-no! – they can’t get to you in time!

You move into a theme-park room. Those of you who are big GMR fans will love this room because there are references to the beloved former attraction. You again see Mickey and Minnie in audio-animatronic form and Donald in projection. He’s having some difficulty with some mustard. Clarabelle Cow is also in this room eating some popcorn. Hold onto your [ear]hats (literally)! You’re about to be swept up in a tornado! With quick turns and stops, it feels like your vehicle is being thrown around by the strong wind.

Next is the underwater scene. This is a very quick experience, and you’re soon back on land. You have to get out of the water somehow, so you end up flying through a storm drain.

The drain dumps you out into a city where you see Pete using a jackhammer to shake the whole room including the characters and your seats! Donald appears again as a van driver. There’s lots to see in this room including some hidden Mickeys!

The next room is going to quickly become a favorite. It’s Daisy’s dance room! Some riders have said that this is the best animatronic in the whole ride. She is adorable and invites all of the guests to dance along with her. The ride vehicles line up in front of the mirror and dance in sync following Daisy’s instructions. The experience is paired with bright lighting and upbeat music. Interestingly, Daisy is also depicted as a dancer at the recently opened Disney’s Riviera Resort nearby.

That was fun, but you’re still lost and separated from Mickey and Minnie! The next room is a factory where you encounter a dangerous crushing tool. Fortunately, Mickey and Minnie are able to rescue you and get you back on Goofy’s locomotive.

Finally, you are back on track – pun intended. Goofy picks you back up and he hardly even knows you’ve been gone! You get to enjoy the perfect picnic with Mickey, Minnie, and Pluto.

Don’t forget to look up and see Chuuby the bird one more time! He’ll entertain you while you wait to head back to the unloading dock! The thrill isn’t over yet, though, because Goofy tries out a switch and ends up electrocuting himself and you. You get one final shake before heading to the unload room.

The music of this attraction will quickly become a favorite and an earworm!

I talked to the composer of the music and also one of the designers of the ride, and they talked about how important the music is for the experience. It weaves the rooms together to create a cohesive feel and also improves the overall understanding of the ride. The music shows us the ups and downs of the plotline and when to expect something unexpected. I don’t want to give too much away, but I think you will really enjoy the music in Mickey and Minnie’s Runaway Railway!

The grand opening was incredible with high energy dancers, the cast of characters, and Disney World’s President, Josh D’Amaro.

In all, the show is about 10 minutes long. It is full of more than 60 hidden Mickeys, and you get to see some of your favorite Disney characters including the Mouse himself and his leading lady in animatronic form. An identical attraction will open on the west coast in 2022.

It seems like fans are coming in droves to check it out. Five minutes after park-opening on March 4th, 2020, the wait time was 300 minutes and growing.

This ride is certainly different from its predecessor, but I think it will become a favorite. I love that Mickey Mouse gets his rightful place in Hollywood, and his legacy can be celebrated for years to come!

Are you excited to ride Mickey & Minnie’s Runaway Railway?