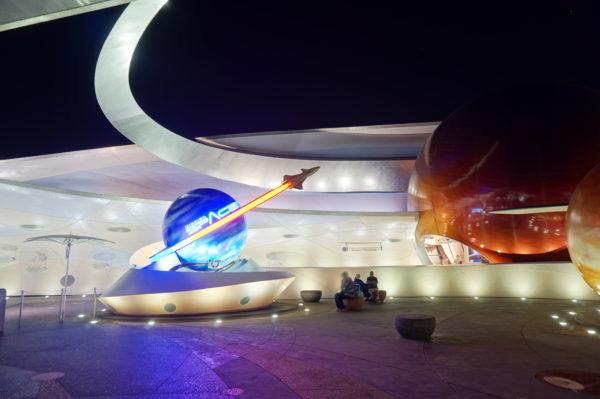 When Mission: SPACE in Epcot‘s Future World opened in August 2003, NASA astronauts said it was the most realistic simulation they’ve ever experienced.

It is possible that Disney made the attraction a little too realistic for some Guests.  In the past riders have became ill, and two people even died because of pre-existing conditions.

To fix this issue, Disney opened a non-spinning version that was more appropriate for more guests. These two versions ran simultaneously until very recently when Disney announced at the 2017 D23 Expo that Mission: Space would be getting an update.

The updated attraction opened on August 13th with some interesting details.

First, Gary Sinese (of “Apollo 13” and “Mission to Mars”) is no longer your guide. He has been replaced with Gina Torres (of “Firefly” and “Westworld”). Torres follows basically the same script as Sinese, and begins by recognizing the fear that astronauts face at the beginning of a mission and says that you too are probably facing some anxiety. They, however, have some training.

Then training videos begin with a mockup of the actual Orion Spacecraft, which is currently being built by Lockheed Martin and is set to launch for the first time in in 2019. Torres, however, will not say anything about NASA anymore probably because space travel now involves more than just NASA but is now available to private companies.

The Orange Team is Updated

The Orange Team, which is still the Mission to Mars, updates the rider view to reflect a more modern and even futuristic view. The color of the Red Planet has been changed to match current pictures from Mars rovers and orbiters. You’ll also no longer fly by the outdated Hubble Space Telescope. Instead, you’ll fly by Hubble’s successor, the James Webb Space Telescope, which will be launched about 930,000 miles from earth in 2018.

The All New Green Team

Instead, you’ll blast off for an orbit around Earth. The show includes real photography of the Earth based on photos and videos taken by actual astronauts from the International Space Station.

The experience includes a launch apparently, though never mentioned, from the Kennedy Space Center in Florida, a fly by the International Space Station, sights of the Hawaiian Islands, China, Italy‘s boot, the Northern Lights, The Nile River, Paris (“The City of Lights”), and landing near a hurricane.

I’ve been on the new Green Mission, and it really feels like an extra-terrestrial version of the nearby Soarin‘ Around the World, which was also recently updated. Disney offers booster seats for guests 40″ – 44″, who can for the first time experience the attraction.

With the new orbit around earth added, Mission: SPACE is a family-friendly attraction for the first time in over a decade. It’s also so cool to see what’s to come in space travel in the next couple years!

The new Mission: SPACE.  Will you ride Orange, Green, or not at all?