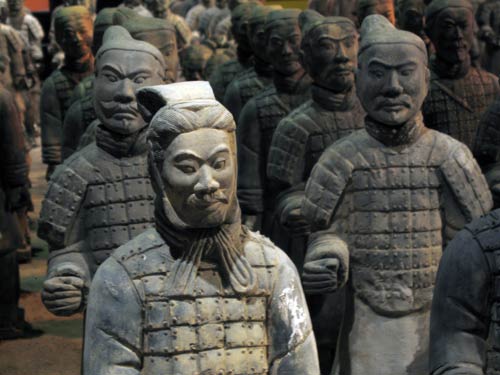 Epcot is such an extraordinary park.  It’s really unlike any other in the world. From the mega-long ride of the Universe Of Energy (clocking in at 45 minutes) to the architectural wonder that is Spaceship Earth, Epcot offers unique experiences.

World Showcase continues that groundbreaking approach with a chance to check out the food, drink, people, and cultures of nations from around the world in just a few hours.

Some of the often overlooked aspects of World Showcase are the mini-museums you can find in many of the countries.  Disney occasionally changes these displays, so the details you see here may change over time.

Let’s take a look at six of these past and present cultural displays, and check out what you can see and learn.

Morocco offers a very interesting exhibit called “Moroccan Style: The Art of Personal Adornment.” As you enter the pavilion from the main promenade, you can see the building housing this exhibit to the left. But for some reason it is rarely visited. I only found it one day when the rain poured down and I needed a place to escape. It could be that the doors are often closed (unlike nearly all Disney shops where the doors are usually wide open). Inside you can walk through a short but fascinating exhibit with information about the jewelry, clothes, and general style of the Moroccan people.

The Japan pavilion hosted an exhibit called “Spirited Beasts: From Ancient Stories to Anime Stars” which included displays that highlight Japanese fascination with mythical creatures from ancient to modern times. If you like mythology, anime, or Japanese culture generally, this one was for you. This exhibit space is located toward the back of the pavilion. The exhibits here change on occasion. One past exhibit dealt with old-style Japanese Tin Toys. So even if you have looked in before, be sure to check this out.

As you enter the grand rotunda lobby of The American Adventure, to your right is an exhibit space that houses revolving exhibits. A recent display included artifacts from The Kinsey Collection, which includes art, books, artifacts, and documents covering 400 years of African-American achievement documented by Bernard and Shirley Kinsey. The displays include a very interesting storytelling using lanterns that seem to combine a projected flame and movie.

Just outside the lobby and waiting area for the Reflections Of China film is an exhibit area called “Tomb Warriors: Guardian Spirits of Ancient China.” It is a recreation of the world famous Terracotta Warriors found in the First Emperor’s tomb. You can learn more about the fascinating history of these warriors – including the fact that each one was made with unique features.

The Stave Church that sits at the entrance to the Norway Pavilion is actually the home to a small exhibit. Many people miss or overlook this (I think again this is due to closed doors). Before the arrival of “Frozen”, the exhibit inside the church was called “The Vikings: Conquerors of The Seas.” It provided information on three of Norway’s famous Vikings – each portrayed in great detail. There was also a terrific model of a Viking ship.  With the arrival of “Frozen,” the display is now about the movie.

Unlike so many of the other exhibits which seem to be hidden away, the exhibits for Mexico are front and center. In fact, you walk through the exhibit area to get to the rest of the pavilion. “Life in Ancient Mexico” takes a look at the tools, calendars, and art of ancient civilizations.

The above exhibits are just a few often-overlooked examples of how you can learn more about other cultures. Don’t forget to check out the attractions, movies, food, and opportunities to talk with people from the host countries as you wander through World Showcase.

Do you enjoy the mini-museum displays in Epcot’s World Showcase?  Have a favorite?