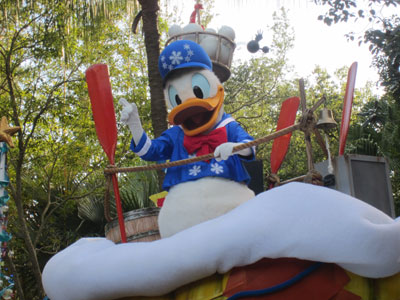 It’s Christmas time at Disney World. You can see it in nearly every corner of the park – from the Castle Dream Lights and the Jingle Jungle Cruise in the Magic Kingdom to the Osborne Family Lights in Hollywood Studios to the Candlelight Processional at Epcot.

When many people think of Christmas, Disney’s Animal Kingdom doesn’t come to mind. However, you can find plenty of signs of Christmas mixed in with the animals.

As you wander around the Animal Kingdom, you will see wreathes, garland, and Christmas trees with animal ornaments. Many of these decorations are in muted greens and browns. These decorations don’t stand out with bright poinsettia reds like you see in other places.

You can see a bit of Christmas bling, however, in Mickey’s Jingle Jungle Parade.

This isn’t really a new parade: it’s more an overlay of a few Christmas decorations and Christmas music on top of the standard Jammin’ Jungle Parade which Disney puts on year round. As such, this parade isn’t so much about Santa and Reindeer as it is about sprucing up the organic-feeling animal floats for Christmas.

The parade lasts for about 15 minutes and wraps around Discovery Island, both beginning and ending in the Africa section of the park.

Since much of the parade route is shaded by trees and includes more narrow streets, the event has something of a more personal touch to it. The crowds seem smaller because they aren’t as deep as you would see in other parks – the space from the edge of the street to the buildings or foliage that line the route aren’t as large. It makes for a fun experience.

Let’s take a look at some photos of this parade.