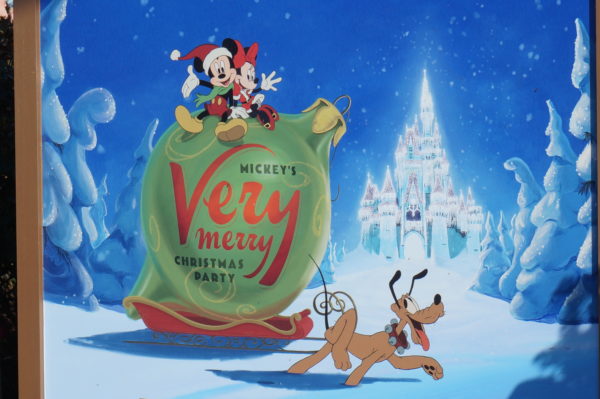 Disney World is even more magical during the Christmas Season, so if you’ve never visited during this time, you really need to. The decorations are amazing, the entertainment is – well – entertaining, and there’s even snow on Main Street USA!

Let’s take a look at what Disney World has planned for Christmas this year!

A Frozen Holiday Wish is a nine minute show in front of Cinderealla Castle during which Elsa, Anna, Olaf, and Kristoff perform. At the end of the show, Elsa turns the castle into ice with 200,000 LED DreamLights.

The show runs from early November, just after the Halloween festivities have wrapped up, through early January twice every evening weather permitting. What’s really nice about this show is that it plays on both party nights and non-party nights so you don’t have to go to the party to see the show.

In the show, Mickey has invited some friends over for a party, and every time the doorbell rings, another friend shows up. As the party comes to an end, Mickey and Minnie host a special holiday finale.

Mickey’s Once Upon a Christmastime Parade

Mickey’s Once Upon a Christmastime Parade is another show that is exclusive to Mickey’s Very Merry Christmas Party – almost. The parade only appears at the party until about a week before Christmas when the parade makes its appearance during regular park hours.

The parade, which includes a ton of Disney characters all dressed in their Christmas finest plus Mr. and Mrs. Claus. There’s also plenty of Christmas music. Whether it’s during the party or during regular hours, the parade starts in Frontierland and ends near the Fire Station in Town Square on Main Street USA.

Holiday Wishes – Celebrate the Spirit of The Season is a special fireworks show with familiar Christmas carols.

When Magic Kingdom replaced the nightly Wishes Nighttime Spectacular show with the new Happily Ever After show, many people wondered whether HalloWishes and Holiday Wishes would be replaced as well. HalloWishes went on as before, so we can be pretty sure that Holiday Wishes will as well.

Mickey’s Very Merry Christmas Party at Magic Kingdom is a hard-ticket event, which means separate admission is required to attend the party.

The Christmas Party will take place on the following nights in 2017:

Party guests can enter the park as early as 4pm and enjoy some attractions before the party actually starts at 7pm. From 7pm to midnight, you’ll get exclusive access to the park, some attractions, special character meet and greets, and themed PhotoPass photos.

Are you going to Mickey’s Very Merry Christmas Party this year?