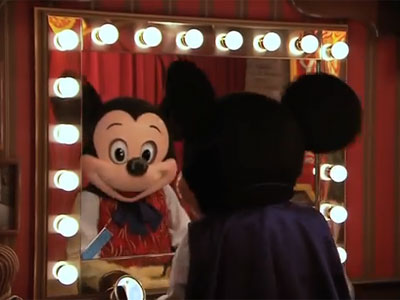 Ah, Mickey Mouse:  he’s about as American as mom and apple pie. He has a long history, first showing up on the big screen in 1928 during his debut in Steamboat Willie, and soon thereafter, in 1929, when he actually spoke words in The Karnival Kid.

Mickey has talked in countless cartoons, stage shows, and parades, but he has never, outside of a few very limited tests, held a one-on-one conversation with individual guests in a Disney theme park…

Princesses like Cinderella or Ariel, often known as “face characters” since their face is not covered often talk with Disney World guests. They can wish a little girl “happy birthday” or ask a little boy if he is enjoying his visit.

However, other characters like Mickey Mouse sometimes referred to as “fur characters” since you see no human face, have been silent during their one-on-one interactions with guests. Interactions have been limited to waves, hugs, and mime-like gestures.

Disney has been testing the technology needed to make Mickey and his friends talk for about the past three years. In 2011 at the D23 Expo, a fan event, Disney tried out two different versions of an interactive, talking Mickey Mouse: one who could speak freely, and another who used just pre-recorded phrases.

Guests have seen a version of this talking character technology at the “Dream Along With Mickey” show at Cinderella Castle. Mickey can move his mouth, blink, and speak along with the show’s pre-recorded sound track. Mickey’s friends, including Donald Duck, Minnie Mouse, and Goofy, do the same.

Speaking a few pre-recorded lines a few times a day, however, is a very different technical challenge than talking in variable ways for hours on end.

The talking version of Mickey is now greeting individual guests in the Town Square Theater on Main Street USA in the Magic Kingdom. Initial reports suggest that this version of Mickey is the one who can only speak with stock phrases. Mickey’s mouth moves as he speaks, and his eyes blink.

This makes for a very engaging interaction, even if Mickey is limited in what he can say.

What The Future Holds

The introduction of a talking Mickey Mouse who interacts with individual guests is a big deal. It has been a long time in the making, even if Mickey is currently limited as to what he can say.

It begs many questions: After Disney has recorded your personal information as part of the NextGen / MyMagic+ roll out, will Mickey be able to wish you a happy birthday or call you by name? Is this a stepping-stone on the way to a version of Mickey Mouse who can hold free-style conversations, and perhaps comment on your pretty blue dress or your cool hat?  All of this could lead to some very exciting and special memories, but only time will tell.

Are you excited to see Mickey Mouse talk with individual guests?