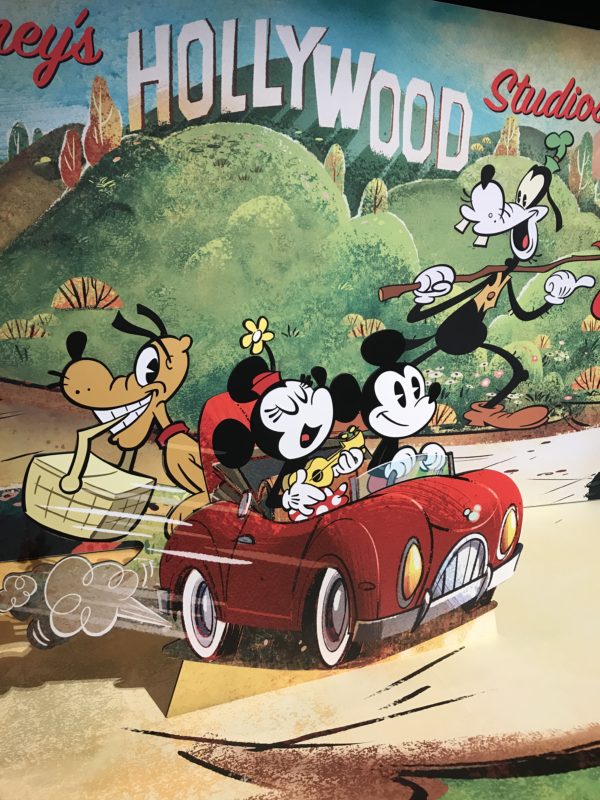 Mickey and Minnie’s Runaway Railway is opening March 4th, 2020, and thanks to the nice folks at Disney Media Relations, I had the opportunity to take a look inside the newly renovated building!

Mickey and Minnie’s Runaway Railway replaces The Great Movie Ride. When you walk into the lobby of the Chinese Theater, you’ll still see movie posters, but the old movie posters have been replaced with Mickey Mouse shorts film posters. There’s some interesting Disney history here!

Mickey’s Connection to the Chinese Theater

In 1933, Mickey’s Gala Premiere debuted at the real-life Chinese Theater in Hollywood. As the story goes now, Mickey shorts always debut at the Chinese Theater. The posters on the walls are of shorts that have (supposedly) been shown in this theater.

As you move farther into the theater, you see a giant movie screen. You are here to see a new Mickey short! The short is called Perfect Picnic. In the short, Mickey and Minnie are on their way to have a perfect picnic. It’s a beautiful day, and they’re driving along in their convertible when Mickey hits a bump. All of a sudden, Minnie’s pie flies out of the car and onto a train, driven by Goofy. The pie lands right on the train’s stack, and since the steam can’t escape, the train blows up. When the train blows up, a hole is blown into the movie screen, and you walk through the screen to get to the ride vehicle, which will be a train.

The effect is very similar to Enchanted Tales with Belle when you walk through the wardrobe’s mirror.  It’s very dramatic and convincing.

The music for the attraction is composed by Christopher Willis who also composed music for other Mickey shorts as well as The Lion Guard, Disney Mickey Mouse, and Veep. He is an Emmy-nominated composer in film, television, and game music.

I got to see in the preview short in the theater.  I have high hopes for this attraction!  The music is catching, the story is entertaining, and it will include some amazing new projection mapping technology.  It is a new take on a classic Disney experience!

Are you excited to see Mickey and Minnie’s Runaway Railway?