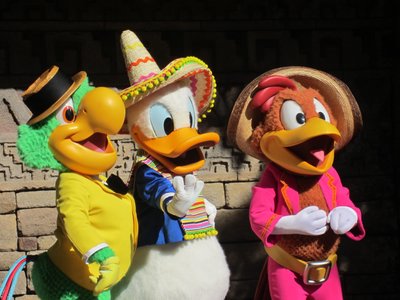 Cinco de Mayo is a celebration held in the United States and the Mexican state of Puebla to remember the freedom and democracy that came from the American Civil War, and it recalls Mexican pride and heritage.

As part of Disney’s Limited Time Magic promotion, the Mexico pavilion in the Epcot World Showcase area is celebrating Cinco de Mayo from May 5 – 11, 2013.

Let’s take a look at some of the events happening in the Mexico pavilion:

The Three Caballeros are available for hugs and pictures. Panchito, Jose, and Donald Duck first came together in a 1944 film that Disney created to promote good will in South America. Did you know that Jose represents Brazil and Panchito represents Mexico?

It seems that the normal Mexican musical acts were playing, but I guess their celebration of Mexican heritage is a bit more special around May 5. I had a chance to listen in on Mariachi Cobre, a group of men who play trumpets and violins who are accompanied by a lady who performs a traditional Mexican dance.

I wandered around the shopping plaza inside the Mexico pyramid looking for the special Cinco de Mayo ear hats. I’m not sure if I actually found them, but I did see a specially decorated ear hat celebrating Mexico.

What do you think about the Cinco de Mayo celebration?