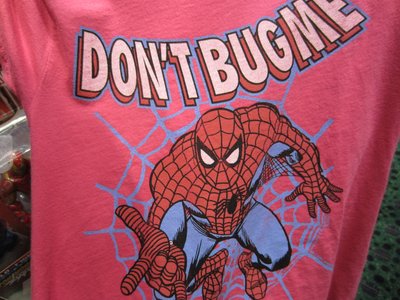 When Disney acquired Marvel in August of 2009, the world immediately started to speculate on what would happen next. Of course, Disney would collect huge royalties on the existing films and licensing deals, and Disney would continue to green light blockbuster films.

But what would happen at Disney Parks? That is where things got complicated.

Long before Disney purchased Marvel, the management team at Marvel cut a deal with Universal Studios that allowed Universal to use the characters in Universal’s theme parks. That is why you can enjoy the “Amazing Adventures of Spider-Man Ride” and the “Incredible Hulk Roller Coaster” at Universal’s Islands of Adventure theme park just up the highway from Disney in Orlando.

Want to win some Marvel buttons?
Check out the entry instructions at the end of this article.

Part of the agreement between Marvel and Universal from many years ago also included a legal stipulation that Marvel characters could not appear in any theme park east the Mississippi River. That means no attractions and no characters in theme parks other than Universal’s parks.

Reports state that the restrictive agreement is renewable in perpetuity as long as Universal pays a licensing fee every year. That basically means this deal is written in stone forever, unless both Disney and Universal agree to a new deal.

Specifically, the agreement also means that, even through Disney now owns Marvel, you won’t see any Marvel stuff inside a Walt Disney World theme park.

That’s a difficult contract issue for Disney, but it doesn’t mean that Disney still won’t use Marvel characters.

For example, you can see a Stark Enterprises exhibit at Disneyland, which promotes Marvel’s Iron Man 3 movie.

Disney is even starting to squeeze Marvel characters into Disney World. Disney has run monorails wrapped with Marvel characters between the Ticket And Transportation Center and the Magic Kingdom. You see, that monorail line never enters the park, so Disney is complying with the contract. That also means that Disney doesn’t and can’t run a Marvel monorail on the line between the Ticket And Transportation Center and Epcot, since that would mean the Marvel characters enter the Epcot Park which isn’t permitted.

Disney has also started to introduce Marvel character merchandise in shops that are on Disney property but are outside the theme parks.

Recently I saw a sizable display of Marvel t-shirts, toys, and magnets on display in the Once Upon A Toy store in Disney Springs.

Let’s take a look at some of the Marvel character merchandise:

Will we ever see Spider Man inside Disney’s Hollywood Studios or the Hulk stomping around in The Land pavilion at Epcot? Perhaps – but only if and when Disney and Universal come to a new contractual agreement, which probably would include Disney paying Universal a huge sum of money.  That could also mean that Universal would someday remove Marvel from its parks – a disruptive and expensive undertaking.

Would you like to win a set of four marvel buttons?  Just send an e-mail to me at (Contest is over.  Winner has been notified).  I’ll add you to our mailing list (if you aren’t already on it) and enter you into the drawing. Once lucky winner will get this set of Marvel buttons. I’ll select one recipient on or around November 20, 2013. I’ll request your mailing address and then send a prize to you. It’s that easy! This give-away is open to everyone, everywhere.

Note: Even if you are already on the World Of Walt mailing list, you still need to send an e-mail in order to be entered into this drawing.

Would you like to see more Marvel characters at Disney World?