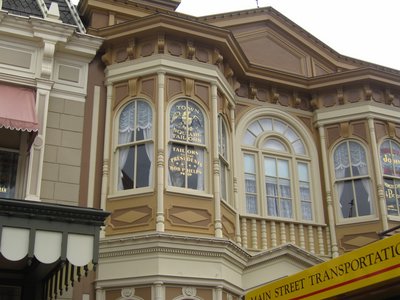 And the credit to developing that magic goes to the employees, or cast members, of The Disney Company.  One very special way that Disney works to honor its cast members is with giving them their own Main Street USA windows on the second floor of the Magic Kingdom.

Here are some of the signs you will see painted on the windows and the meaning behind them:

This is a window located above one of the first stops on the street.  It honors Roy O Disney, who was Walt’s brother.   In the early days of the construction of Disney World, shortly after Walt’s unexpected death, there were questions about whether the project to build the Magic Kingdom should go on.  Roy made sure that the job got done, even though he was well into his 70s – and he could have spent his time, energy, and sizable fortune on his grandkids or on leisure pursuits.  When asked why Roy dedicated himself to the project, he once explained that he didn’t want to have to answer to his brother when he next met him why the job didn’t get done!

This window pays tribute to Walt’s father Elias.  Elias started many businesses, most of which failed.  He was born in Canada to Irish-born immigrants.  He married his wife, and Walt’s mother, Flora in 1888 in Kismet, Florida (a city which no longer exists) – just a short distance from the land that Walt would eventually purchase to build Walt Disney World.  While Elias wasn’t necessarily considered a success in business, his entrepreneurial spirit had a definite impact on Walt and Roy.

A friend in deeds in a friend indeed.”  This play on words (normally ‘a friend in need in a friend indeed”) references the process by which Disney put together many shell companies in order to assemble the huge tract of land in Central Florida without driving up prices. The process started in 1959 when the Disney Company started to look for land for an east coast theme park.   Walt flew over the land that would eventually become Disney World in 1963 and immediately like the site – he could see how major freeways intersected from high above.  In 1964 the company preceded quietly acquiring land, but eventually locals started to notice all the real estate transactions and speculated on the land owner.  After asking some pointed questions of Walt and observing his stunned reaction, reporter Emily Bavar ran a story in the October 25, 1965 Sentinel Star (which later become The Orlando Sentinel) with the following headline: We Say: “Mystery” Industry Is Disney.

This window honors Major General Joe Potter who was responsible for constructing the infrastructure of the Magic Kingdom.  General Potter graduated from United States Military Academy at West Point and MIT.   He planned logistics for the Army during World War II and played a key role in the building of the Panama Canal.  All this helped the General for the huge job of building Disney World, a job that actually included creating a new lake – Bay Lake.  General Potter was seen by many as the primary communicator between Disney and the Central Florida community during the original construction process.  General Potter died in 1988.

This window honors Buddy Baker, Bob Jackman, and George Burns.  The three created music as diverse as the theme song for the Haunted Mansion, Pirates of the Caribbean, Winnie the Pooh, and area music that sets the mood around the parks.  Buddy specifically was the musical director for Epcot and composed music for both Future World pavilions, including the Universe of Energy, and World Showcase, including the American Adventure.

This window honors Frank Wells, the president of the Disney Company from 1984 to 1994 – a period of corporate renewal under his leadership and that of Michael Eisner that saw revenues leap from $1.5 billion to $8.5 billion a year.  Wells loved to climb mountains.  He set a goal to climb the tallest mountain on each of the earth’s seven continents in a single year.  He came close – he had to turn back from near the peak of Mount Everest.  He died in a tragic helicopter accident.  Disney also honored Wells by naming the a building at the Disney Studios after him.

This window honors Ub Iwerks.  Considered to be one of Walt’s oldest friends, Ub went into business with Walt in Kansas City in 1919 and formed the unsuccessful The Iwerks-Disney Studio.  After the company closed Walt moved to California, and the rest is history.  Ub animated the very first Mickey Mouse short film called “Plane Crazy”.  He left Disney to make his own films but eventually returned to work with Walt. He went on to develop camera lenses that were used in the development of attractions at Walt Disney World including The Hall Of Presidents.  Ube won two Academy Awards for his work.

An Ultimate Disney Honor – A Window On Main Street USA

The men and women who create the magic of Disney often work behind the scenes and are not seen by the general public.  One of the highest honors Disney can give to a cast member is a window on Main Street USA.  Some say it is the ultimate honor, along with being named a Disney Legend.  The windows on Main Street publically recognize the people behind the magic in the theme park that is experienced by, on average, more than 15 million people a year.