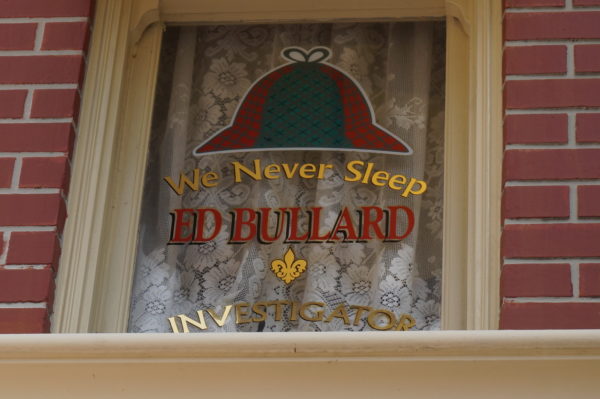 In the past, we have looked at the windows on Main Street USA that honor Walt’s family members and his executive team. Today we’re going to look at the originals – people were integral in the opening of Disney World and many of them even started in Disneyland.

So how do you get a window on Main Street? Well, you have to have made a significant contribution to the parks in some way. According to Marty Sklar, a long-time member of Walt Disney Imagineering, it usually happens upon retirement, and it’s bestowed only upon those who have reached a very high level of service, respect, and achievement. Magic Kingdom Management and Walt Disney Imagineering, who ultimately creates the windows, have to agree that the individual is worth of the honor – which is one of the most prestigious awards the company gives.

Tom Nabbe only paid to get into a Disney theme park once in his life, and his admission was worth it because Walt saw him and made him a Newsie. He didn’t push papers for long until Walt decided that he looked like Tom Sawyer and hired him to play Tom Sawyer on the island bearing the name. The deal was that he had to keep a C-average in school and bring his report card to Walt for inspection every quarter. He soon got to manage other attractions and met his wife working at a concession stand.

In 1971, he transferred to Disney World to manage the monorail. Nabbe helped to open Disneyland Paris and after 48 years became the Manager of Distribution Services at Disney World.

He was the last working member of Club 55, and the chief membership requirement is a paycheck from Walt dated “1955”.

Roy Davis, Bob Price, and Bob Foster were all pseudonyms for those who visited properties in Florida, including Roy Disney, to consider them for the planned Disney World. They were supposedly from Kansas City, and Foster would even stop there on his way back to California to avoid suspicion. It was also convenient because he could see his mother while he was there.

The window for M.T. Lott Co Real Estate Investments seemingly lists off a bunch of meaningless property companies. A closer examination shows that each of these businesses were names of skeleton companies used in the land acquisition process for Disney World.

Major General William E. “Joe” Potter was personally hired by Walt Disney to direct the construction of infrastructure for Walt Disney World. He became the first employee in Florida.

Before Disney, he worked in the Army Corps of Engineers moving earth. One of his jobs was to move earth for the New York World’s Fair. By the time the park opened, he was the park’s Senior Vice President. He was named a Disney Legend in 1966 and retired in 1974. His window appears above the Main Street Confectionery.

Pete Marham, along with General Joe, was one of the first people to be hired in Disney World. He was the General Contractor for the park, and he later became the Vice President of Project Management for Walt Disney Imagineering. His window is above the Confectionery.

Bob Allen, Pete Crimmings, Dick Evans, Bill Hoelscher, Bob Mathieson, and Bill Sullivan, were all members of Magic Kingdom’s opening committee. Their service is has been made immortal in a window above Crystal Arts titled Windermere Fraternal Hall; this is presumably because they were all from the city of Windermere, Florida, which is just a few minutes from Disney property.

Allen started as a ride operator for Casey Jr. Circus Train in Disneyland in 1955 and worked his way up the ranks as the Chairman of the Operating Committee for Disney World and finished his career as the VP of the park. He was named a Disney Legend in 1996.

Hoelscher started as a Jungle Cruise Foreman at Disneyland then worked as a recruiter for the New York World’s Fair. He was later in charge of Cast Activities in Disney World.

Bob Mathieson, who also appears in the window discussed above, made significant contributions to the opening of Disney World. He started as a sound coordinator for Disneyland in 1960 then worked as the Manager of Guest Relations and then managed operations and technical assistance staff for attractions for the 1964 World’s Fair.

Norman Dale “Buddy” Baker scored many Disney movies and attractions including Grim Grinning Ghosts for Haunted Mansion and The Many Adventures of Winnie the Pooh. He also arranged the music for Impressions de France in the World Showcase France Pavilion.

Baker is joined by B. Jackman and G. Bruns nearby.

Davis was one of the original Nine Old Men. He also worked on the Pirates of the Caribbean, Haunted Mansion, Enchanted Tiki Room, it’s a small world, Country Bear Jamboree, America Sings, and Jungle Cruise.

At Center Street above Crystal Arts, Frank Millington, Chuck Fowler, Hank Dains, and Marshall Smelser are praised for their work in the Walt Disney Studio Decoration Department and their contribution to keeping Disney World decorated after the 1971 opening.

Morgan Evans started designing the landscaping for Disney’s family home and then was hired to do the same at Disneyland. However, since finances were tight, Walt had to make decisions about what was important and what could wait. Landscaping was one of the things that could wait, so Walt instructed him to label the weeds with Latin names so people wouldn’t realize the landscaping wasn’t finished on opening day. He later served as the Director of Landscaping for WED Enterprises and for all of the Disney Parks.

Tony Virginia was the head of landscaping in Disney World, and both of their contributions are applauded in a window above Crystal Arts.

Partners in Planning – B. Laval & Associates – “What We Build Together Can Last Forever”

Bruce Laval, an industrial engineer, invented what he called “guestology” as a way to improve the guest experience using computer-simulated analytic techniques. He also worked on the creation of FastPass. Part of his contribution was proving, mathematically, that decreasing the number of monorails on the track can actually decrease wait times!

Jack Lindquist started as the Advertising Manager at Disneyland in 1955, was named Director of Marketing for Disneyland and Walt Disney World in 1971, and became President of Disneyland in 1990. After he retired in 1993, he was named a Disney Legend in 1994. His window appears above the Emporium.

Bob Phelps, whose window appears above the Chapeau Hat Shop, designed costumes for all of the presidents in Hall of Presidents and worked on other costuming as well.

Owne Pope ran a pony farm at Disneyland to manage the stress of working in the parks. He assembled teams and trained horses for Disneyland then moved to Disney World to do the same in the East Coast park. His window appears above the Car Barn.

Bob “Sully” Sullivan, started as a Ticket Taker in Disneyland in 1955 and moved up to become an Operations Supervisor. He helped open Disney World and remained the Operations Executive until 1993 when he retired. Throughout his career, he worked with the 1960 Squaw Valley Olympic Winter Games and on Disney Attractions at the New York World’s Fair. His window is above Plaza Ice Cream.

The Musical Quill – Lyrics and Librettos by X. Atencio

Disney is famous for their music, so it’s fitting that they would pay tribute to Francis Xavier “X.” Atencio above the Opera House. He wrote the music and lyrics for Pirates of the Caribbean, If You Had wings, Space Mountain, Haunted Mansion’s Grim Grinning Ghosts, and Yo Ho (A Pirates Life for Me). He also wrote the epitaphs at the Haunted Mansion including his own and voiced the skull in Pirates of the Caribbean Dead Men Tell No Tales.

Very little is known about Ed Bullard except that he was head of security at Walt Disney World. Obviously he did enough to warrant having his own window above the Emporium in Magic Kingdom!

Charles Corson and Robert Jani worked in the casting department for the Walt Disney Studios. Corson was the Director of Entertainment for Disneyland and Walt Disney World, and he was responsible for casting the Dapper Dans, live Mermaids, high-wire Tinkerbells, and members of the Mickey Mouse Club. Jani was the VP and Creative Director, and he created much of the live entertainment for both United States parks including America on Parade and the Main Street Electrical Parade.

Ron Logan was the former VP of Walt Disney Entertainment. He could play a variety of instruments, and he performed as a trumpet player in Disneyland. His talent was recognized immediately, and he was soon put in charge of casting, creating, and producing live entertainment for the Company and all of its theme parks plus the Disney Institute and Disney Cruise Line. He was also the Founder and President of the Disney Theatrical Productions, which produced Disney’s Broadway shows including Beauty and the Beast.

John Keehne’s brother Chuck was the head of costuming at the Walt Disney Studios in Burank. Disney has a long history of hiring family members assuming that hard work and quality runs in the family. Tom Pierce was a costume designer, and Ken Creekmore was the Design Coordinator for Disney World’s Costume Shop managing the largest active costume facility in the entire world with more than two million pieces.

Interestingly, the window used to include a sixth name, but it was removed. A painter who worked for Disney’s sign shop for just a few months was working on touching up the windows on Main Street when he realized that there were only five names on this window making it unbalanced. He decided to add his own name to even things out. It took Disney ten years to discover it, and they removed it immediately because that was the only significant contribution he’d ever made to Disney.

Disney’s first studio was on Hyperion Avenue. The men listed on this window are honored for their work to create every film and attraction element for Walt Disney World.

Charles Ridgeway joined the team at Disneyland in 1963 and was quickly promoted to Director of Press and Publicity for Walt Disney World. He was involved in the launch of Magic Kingdom in 1971, Epcot Center in 1982, and Euro Disneyland in 1992.

Miss Joyce started working at the Disney Studios as a traffic girl delivering mail and supplies then transferred to the Ink and Paint Department where she spent 16 years inking cells. She joined WED Enterprises in 1962 before it became Imagineering where she worked on Audio Animatronic figures for The Carousel of Progress and it’s a small world, for the 1964 World’s Fair. She became the resident it’s a small world expert developing new dolls for the attraction and maintaining them. She also helped select the color palette for Prince Charming’s Regal Carousel’s horses.