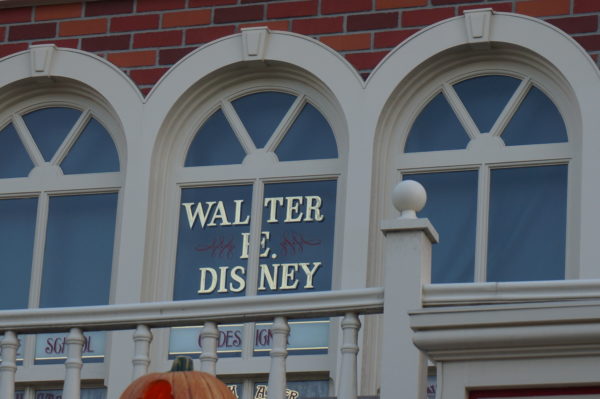 Walt Disney wanted Main Street USA to be like any small town in the United States, and he completed it with shops on the bottom floor and fictional business windows on the second and third floors. While these upstairs areas are closed to guests, they do serve as offices and conferences rooms for the really high ups in Magic Kingdom. There are walls between the offices/rooms and the windows so no one can see out or in, which would spoil the show.

Let’s take a look at some of the stories behind the Main Street Windows, which pay tribute to people who have made extraordinary contributions to the Disney Company.  Getting a window on Main Street USA is one of the highest honors the Disney parks conveys.

We will start with Walt’s family and move to those who succeeded him in leadership of the Walt Disney Company!.

Elias Disney, Walt and Roy’s father, was one of the first to be given a window on Main Street. The name represents Elias’s contracting business, which he started in 1895 in Chicago. For the next decade or so, Elias built and sold homes and even a church, which was dedicated in 1900. Elias closed the contracting business when he moved his family to Marceline for fear of the rising crime rates within the city of Chicago.

Walt Disney did not live long enough to see his dream of Walt Disney World come to life. He died in 1966 of lung cancer. However, the dream was still his, and the park bares his name.

Walter E. Disney is honored again in the park that bears his name but that he never got to see. He was, however, actively engaged in the planning, and this window above the Plaza Restaurant pays tribute to his efforts along with his deal of architectural, show, and art designers. Together, they created Magic Kingdom, the Utilidors, the Disney resort hotels, and many of the attractions through WED Enterprises then Walt Disney Imagineering.

Dick Irvine formed the WED Design Group and headed WED until his retirement in 1973. John Hench was the longest serving employee of the Disney Company. He started in the Story Department in 1939, painted backgrounds, then joined WED Enterprises. He was 94 years old when he passed away but only after serving Disney for an incredible 65 years.

After Walt’s death, many people assumed that Roy, his brother, would sell the company and head into retirement as planned. However, he postponed his retirement so he could see through the opening of the Magic Kingdom, and bring to life his brother’s legacy as he intended. If not for Roy, Magic Kingdom, and ultimately Disney World would never have happened.

Diane Disney Miller was Walt’s eldest daughter. She married Ron Miller who later became the President of Walt Disney Productions and immediately preceded Michael Eisner. Lazy M is the name of their ranch in Wyoming, and the other names listed on the window are Diane and Ron’s children, Walt’s grandchildren.

Sharon Disney was Walt’s youngest daughter. Her husband, Bill Lund, was a real estate developer who helped scout property that would become Walt Disney World. They enjoyed antiques. Their three children, Walt’s grandchildren, are also honored on the window.

Roy E. Disney, Walt’s nephew and Roy O.’s son, loved to sail. He became the Vice Chairman of the Walt Disney Company, and his service is honored with a window above Crystal Arts in Magic Kingdom. His window also honors his wife and children.

The men honored in this window above Main Street Bakery were referred to as the “Athletic Executives” because they all had a background playing college and professional football.

Nunis started at working in Disneyland in 1955 when the park employed just 600 Cast Members. He worked his way up the ranks during his 44 year career developing the original training and orientation program for Disneyland and retired as the Chairman of Walt Disney Parks and Resorts in 1999. He was personally mentored by Walt Disney and served on the Board of Directors from 1981 until 1998 and as Director Emeritus until 2000.

Ferrante was the Vice President of MAPO and oversaw ride and show production and installation for Walt Disney World and later Tokyo Disneyland and Euro Disneyland.

Dr. Card Walker – Licensed Practitioner of Psychiatry – And Justice of Peace – “We Never Close” (Except for golf)

Card Walker led Walt Disney Productions along with Donn Tatum and Ron Miller after Roy O. Disney died. He served as the President, Chairman, and Chief Executive Officer of the company after starting n the mailroom in 1938. He took a brief hiatus between 1941 and 1945 to serve in the US Navy then returned in 1965 as the VP of Marketing. He became the Executive VP of Operations after Walt died and the COO in 1968. He then became President in 1971 and CEO in 1976. After supervising the openings of Epcot and Tokyo Disneyland, he retired in 1983 and was named a Disney Legend in 1993. He continued to serve on the Board of Directors until 1999.

Seven Summits Expeditions – Frank G. Wells, President – “For Those Who Want to Do It All”

Frank G. Wells was the President and Chief Operating Officer for the Walt Disney Company from 1984 until his death in a helicopter accident in 1994. Infamously, he’s known for replacing Walt’s son-in-law Ron Miller when the board ousted him, and he’s personally known for his goal of the Seven Summits, thus his window’s name. He loved mountain climbing and wanted to reach the tallest summits on each of the seven continents. He succeeded at all except one: Mount Everest, which he attempted twice.

Many say that he and Michael Eisner are responsible for returning the company to success in the 1980s, and he’s honored with the highest window on Main Street above Crystal Arts.

After his death, he was named a Disney Legend.

Michael Bagnall worked in finances in Disney World. He was the son of George Bagnall, Disney Board Member from 1961-1974, and he worked his way up through the ranks to Chief Financial Officer for the Walt Disney Company.

David Snyder was the head of Digital Animation Control System, which was the computer system that controlled shows.

Cecil Robinson worked in facilities and became the Vice President of Facility Services. He also worked in the financial division for ten years becoming the head of accounting at Disney World.

Financing Disneyland was no small feat. In fact, due to budget constraints, the park wasn’t even finished when the first guests were admitted. Disney knew when they opened Disney World that they needed to watch their finances, or things could quickly get out of control. Thankfully, Disney had some great men in charge of this task. Tryon was the former treasurer for Walt Disney Productions. Bagnall was the Chief Financial Officer. And Bongirno was the former President of Walt Disney Imagineering. The name B. Franklin refers to Benjamin Franklin, an avid money-man himself, who said “A penny saved is a penny earned.”

Bonar Dyer was the Vice President of Industrial Relations for Walt Disney Productions, which meant it was his job to correspond with the labor unions that represented Disney Cast Members. So why the magic hat and rabbit? Because many said he was a magician when it came to handling relations with the unions.

Sayers was the Chairman of Disneyland’s Park Opening Committee from 1956 to 1959. He was first the Director then the Vice President of Lessee Relations for Disneyland then Disney World. After he retired in 1975, Clark took over Disneyland and Eagrell took over Walt Disney World.

Nolan Browing was a financial expert and attorney. He specifically worked with Roy Disney, teaching him about debentures, which are unsecured loan certificates backed by general credit that specified assets. Roy used debentures to raise money to build Disney World without having to have real collateral. Investors could convert their debentures to stock when Disney’s stock rose to a certain price, which Roy believed it would when Disney World became a reality.

Al Weiss, former President of the Walt Disney World Resort then Executive Vice President, spent 39 years with the company. He started at 18 years old as a “z-runner”, which meant that he would zero out cash registers at the end of shifts.

Meg Gilbert Crofton holds one of the newer windows on Main Street added in 2015. She started as a Marketing Manager in 1977 for a telecommunications subsidiary company that provided services to the resort. In 1984 she became the Manager of what would become Shades of Green and then was appointed VP of HR then Executive VP of HR in 2002. Her last position with Disney was the President of Worldwide Operations of all Disney Parks and Resorts. She retired in 2015 and was honored with this window, which showcases her journey through the Walt Disney Company.

Lee A. Cockerell was the Executive VP of Operations, and his son ran Magic Kingdom for three years. This third father and son duo on our list was committed to maintaining a level of excellence and they’re honored for that determination above the Watches Store.

Main Street USA windows: have you seen the tributes to Disney family and executives?