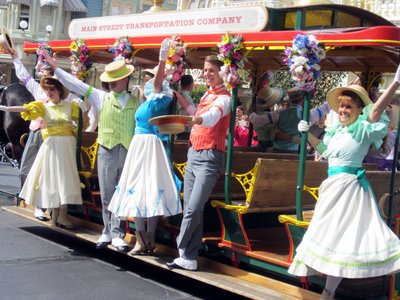 The show represents what makes Disney special. It is often an unexpected surprise – many people happen upon it when rushing into the park. And nobody will book a trip to Disney World just to see this show – except maybe the mom or dad of the performers. But the show adds to the overall experience of being in turn-of-the-century America on Main Street – much as the Frontierland Hoedown show takes you to the Wild West.

The performers are dressed in the best, bright spring colors and sing about all things spring – from April showers to May flowers.

What do you think about the spring Trolley Show?