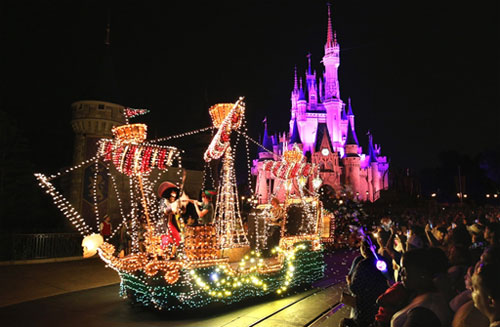 Main Street Electrical Parade to End at the Magic Kingdom

The news to pull the plug on the Main Street Electrical Parade was a jaw-dropper for those who have had the unique blinking pageant forever burned into their retinas.

Reactions from die-hard Walt Disney World fans have been lukewarm about recent changes at Walt Disney World, including the rumor that may switch up Ellen’s Universe Of Energy to a new Guardians of the Galaxy ride. But this is no animatronic Ellen wresting a Dinosaur. The exclusion of the Main Street Electrical Parade from future Disney memories has been received as an unacceptable fate among fans.

The shocking news has been on the minds of every Disney Junkie. The statement from Walt Disney World starts in proud Disney tradition; with a story. In this case, the story is reminiscent of Carl & Ellie gazing at the clouds in the opening of Up;

“Since making its Florida premiere in 1977, the parade has become one of the most beloved entertainment spectacles anywhere. Watching the Main Street Electrical Parade has to become a rite of passage with parents and grandparents eager to share the nostalgic experience with their children.”

The next sentence continues the theme of the opening of Up:

“Families will have one more chance to see the parade and share this special memory, on select nights, before it departs.”

That’s right. Ellie’s dead, Carl is alone, and your Main Street Electrical Parade, which Disney clearly recognizes as your family tradition, is gone, too.

In fact, the press release from Walt Disney World seems to be lamenting the choice, as though discontinuing the Main Street Electrical Parade is something that happened to them.

“Brought to light in the early 1970s, the original Main Street Electrical Parade helped establish a Disney Parks reputation for innovative, trend-setting live entertainment. As lights go down along the parade route, the parade brings a variety of beloved Disney animated feature films to life through three-dimensional floats covered with approximately half a million colorful LED twinkling lights. The parade’s iconic musical theme, the electrically synthesized “Baroque Hoedown,” is interwoven with favorite Disney themes. It all adds to the unique upbeat excitement of the procession.”

The release goes on to tell about the various different floats, reminding you of the sheer awesomeness of the Main Street Electrical Parade. Remember Pete’s Dragon breathing smoke and the amazing Peter Pan float? Who could forget Snow White’s glittering light-infused dress that launched a thousand gypsy weddings?

Then another cursory, ‘Well, forget it because it’s gone in October. We gave you about a month’s notice. Think you can plan a vacation in that time frame? Sorry not sorry!’

For those who couldn’t make it to Walt Disney World to see the farewell voyage of the Main Street Electrical Parade, there is a silver lining. The parade will be appearing in Disneyland in California for a limited time in 2017, predictably just long enough to soothe the masses.

In the grieving process, the news is still very raw, and we fans are clearly still in denial. The statement from Disney seems to confirm that this is no refurbishment, but also does not allude to another electrical parade perhaps with a different name and updated technology.

With the incredible water and light show, World of Color, blowing minds at Disneyland, and the Rivers of Light Experience at Animal Kingdom, my bet is that Walt Disney World is going to bring a nighttime spectacular to Magic Kingdom the likes of which will make us think back on Main Street Electrical parade and go, ‘aww, that was cute, it thought it was a parade’.

Will you miss the Main Street Electrical Parade?