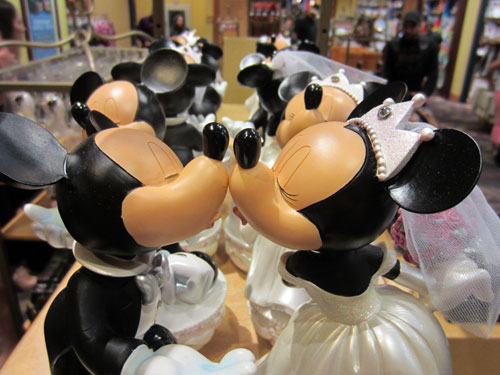 So You Want To Get Married in The Magic Kingdom?

Walt Disney World recently announced that you, your future spouse, and 300 of your closest friends can enjoy your nuptials after the park closes in an empty Magic Kingdom. You can choose what kind of theme you’d like right down to whether or not you want a horse-drawn carriage to bring you down Main Street USA and to the “altar” at the front of Cinderella Castle.

Of course, this dream wedding is going to cost you quite a bit of cash. Packages start at $180,000.

This got me thinking this week…what else could I buy in Walt Disney World for $180,000? I looked into it. So You Want To Get Married in The Magic Kingdom? Here’s what you could buy instead:

Okay, so who wouldn’t want to stay at the Poly for half of the year? For the same price of your dream wedding, you could basically transform Disney’s Polynesian Resort into your apartment for six months. Plus, you could have Disney’s fantastic housekeeping service cleaning up your place and making up your room every day while you’re out! Sounds like a better deal to me!

What is this Grand 1 Yacht, you say? It’s a 52-foot luxury yacht based at Disney’s Grand Floridian Resort. Imagine boating around the Seven Seas Lagoon on your own for two straight weeks, taking in the fireworks, being pampered by the ship’s captain, a deckhand, and waited on by your own butler. Of course, most guests only rent the Grand 1 out for a couple of hours at a time, but with all that money you’d be saving on not planning the fairytale wedding, you could enjoy a lazy two weeks at sea!

You notice them right away when you’re walking through any of the Walt Disney World theme parks. First, you see the plaid vest of the VIP tour guide. Then you start staring at who is following them around. “Is that a celebrity? I think it’s Ray Romano!” These are actual things I’ve said while a WDW VIP tour guide and his/her party have walked briskly past me and my family in the parks. Imagine being able to have that service for 360 hours! No waiting in lines for attractions, no difficulty trying to get reservations, private rides to and from the parks in a fancy car or SUV. I don’t know about you, but I am thinking I’d much rather spend all of my time cruising around WDW as a VIP over one fancy wedding night!

Okay, this might seem a little extreme. Why on Earth would anyone need 36,000 churros? I’m not really sure, but you can buy that many with $180,000. Maybe you could treat 36,000 guests to free churros one day in the Magic Kingdom? I’m sure that karma would have to be good for something, right?!

Imagine standing outside the Magic Kingdom for as long as it takes to hand out 12,008 sets of those black and red, classic Mickey Ears to every kid who walks through the turnstiles. Not into the whole charity thing? You could always just wear a different set of Mickey Ears yourself every day for 12,008 straight days. That’s basically 33 straight years of brand new Mickey Ears. You might be the weird “Mickey Hat Guy/Gal” in your neighborhood but hey, who are your neighbors to tell you how to spend your $180,000?

Of course, you could always just spend your $180,000 on that dream, fairytale, Magic Kingdom wedding if you’d like! That’s totally up to you! All I wanted to do with this article was give you some options!

As always, thank you so much for reading, and if you didn’t think this was funny/interesting/a little entertaining, it was written by Herb!

Would you like to get married in the Magic Kingdom?