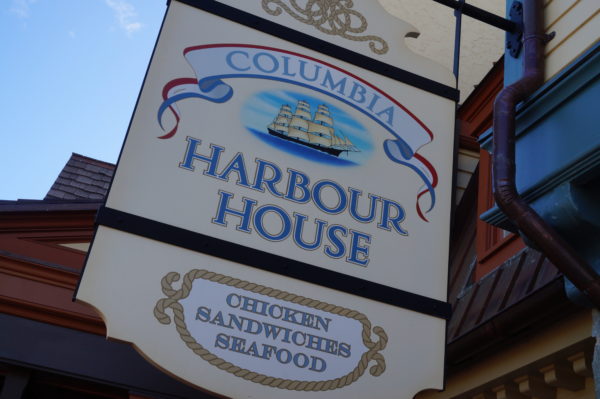 Magic Kingdom was Disney World’s first theme park. It is a classic, a favorite among many, and there are some excellent dining options here – both quick-service and table-service.

Aloha Isle Refreshments is the go to spot for Dole Whip fans in Magic Kingdom. It’s hard to classify this location as a “quick-service restaurant” since it only serves Dole Whip-related items like the Dole Whip Cup, the Pineapple Float, pineapple juice, and the pineapple spear, but it was the front runner, nonetheless.

Out of 2362 surveys, over 98% of people enjoyed their Dole Whips! This shouldn’t surprise anyone.

Sleepy Hollow Refreshments is another quick-service that is pretty unique to Disney World. They operate on the assumption that everything is better on a waffle, and I can’t say that I disagree with that. Apparent neither do other people; 95% of 723 people surveyed gave it a thumbs up.

If you want to try a fresh fruit waffle sandwich with chocolate-hazelnut spread or a sweet and spicy chicken waffle sandwich, head over to Liberty Square and check it out.

Columbia Harbour House is also located in Liberty Square, but it’s totally different from Sleepy Hollow. This quick-service location has a New England theme in the food and décor. You’ll feel like you’ve stepped back in time as you enjoy New England clam chowder and other delicious fish dishes in colonial-themed dining rooms.

With such an impressive menu, it’s not surprising that Columbia Harbour House had 2067 surveys completed with over 93% of them giving positive feedback.

Main Street Bakery is aptly named for its location on Main Street USA. This is Magic Kingdom’s Starbucks location, so you’ll find your favorite beverages plus some delicious pastry items.

It’s obvious that not too many people can forgo their Starbucks fix even on vacation since 1264 people were surveyed for this location. An impressive 93% enjoyed their experience despite the average 20 minute wait for coffee.

People may love to hate Gaston, but his tavern has some pretty good food. Specifically noteworthy are the huge cinnamon rolls, which are served warm. Another popular item is LaFou’s Brew, which people will recognize from the movie.

Of the 1496 people surveyed, almost 92% of people liked Gaston’s Tavern. It’s hard to tell if Gaston bullied them into rating his hang out positively.

Casey’s Corner is a popular stop at the Magic Kingdom. However, it didn’t rate as high as I would’ve thought; 88% of 1190 people gave it a thumbs up.

Perhaps this is because Casey’s Corner serves stereotypical “theme park” (or in this case “ball park”) food. While I love the hotdogs here, you can’t go wrong with the corn dog nuggets.

No matter what time of day you’re visiting, you’ll have a hard time finding a seat nearby, but it’s worth the stand-and-eat dilemma, at least in my opinion. If you can visit while the pianist is playing, you’re in for an extra special treat.

Pecos Bill Tall Tale Inn and Café recently got a makeover removing one of my favorite things from the menu: BBQ Pulled Pork. It was totally re-themed to a wild-west setting with fajitas, burgers, nachos, burritos, and salads – basically Disney’s version of Chipotle. While it’s still good, it’s not as good as it used to be.

It seems like other diners agree with me since it only received 86% positive reviews from 1554 people.

The Friar’s Nook is located between Princess Fairytale Hall and Storybook Treats in New Fantasyland. It’s a pretty basic quick-service location, but if you need a quick bite, it’s a good place to go. The BBQ Mac & Cheese is a unique item on the menu, but you can also get a hot dog or apple and caramel dippers.

It doesn’t seem to be a very popular location since it only earned 362 votes, which is much less than any of the other quick-service restaurants on the list. Only 85% of people liked their food here.

Cosmic Ray’s Starlight Café is another go to spot for me. I love the rotisserie chicken not only because it’s delicious, but also because it’s enough to share. However, of the 1919 people surveyed, 81% liked the restaurant, which is worse than average.

The Lunching Pad is a neat restaurant because of its central location in Tomorrowland underneath the Tomorrowland Transit Authority PeopleMover. It’s a walk-up window with tables spread around the location, and it serves pretty standard theme-park fare like hot dogs, pretzels, and chips. You can, however, get frozen beverages in souvenir cups. If you need a cool drink, this might be a good place to stop!

Pinocchio Village Haus is a popular restaurant as represented in the 1256 reviews it received. It’s surprising then that only 82% of people liked their restaurant.

This quick-service in Fantasyland is known for their flatbread pizzas, but they also serve pasta, sandwiches, and salads.

Golden Oak Outpost is located in Frontierland, not too far from the Country Bear Jamboree. In fact, you can get a Country Bear Jamboree souvenir mug with your choice of beverage. It’s not a very popular location with just 127 people surveyed, and it only received an 81% positive rating.

This could be because it only serves chicken nuggets and fries. If you only have one entrée and you can’t do it perfectly, it’s not going to earn you a high rating!

Tortuga Tavern is in Adventureland. If you’re looking for a turkey leg, this is the place to go! Despite the fame of the turkey legs, only 140 people were surveyed here, and 80% liked it.  This location isn’t always open, which may have contributed to the low number of responses.

Tomorrowland Terrace is most well-known for their dessert party during the fireworks, but they’re also occasionally open at other times. They have some items that can’t be found at other quick-service locations in the park like a spicy chicken sandwich, a smoked sausage sandwich, and pulled pork banh mi sandwich.

Regardless, with just 77% of 232 people giving it positive reviews, Tomorrowland Terrace fared worse than the rest of the list.

Westward Ho Refreshments is a small counter in Frontierland with a very limited selection. They serve corn dogs seasonally and chips, cookies, and beverages year round.

Only 33 people were surveyed here, and just 72% of them liked the experience.

The Diamond Horseshoe is unique because it’s an all-you-care-to-enjoy establishment. The meal starts with a salad and moves on to platters of BBQ pulled pork, smoked sausage, beans, mac & cheese, turkey, beef, and corn on the cob. It’s finished off with a brownie. Regular drinks are included in the price, but you can get Prairie Punch or Premium water for another $5.

Despite the fact that it’s a lot of food, it fared the worst on the quick-service list; 117 people were surveyed, and only 70% liked the buffet. This could be due to the fact that it’s only open during the busiest times of the year when every other restaurant is so packed that Disney has to resort to this one.

The Crystal Palace is a favorite in Magic Kingdom. Almost 1500 people gave it a thumbs up.

This top rated restaurant is served buffet style for breakfast, lunch and dinner, but it’s not just the food that’s popular. This is your chance to dine with your favorite Winnie the Pooh characters!

Be Our Guest is a new restaurant that opened with New Fantasyland. It is a quick-service location by day and a table-service restaurant by night. Its popularity is reflected in the 3891 people surveyed. With a 90% positive rating, it’s obvious that it’s a front-runner.

Guests enter Beast’s castle, which is set in the French Countryside. After dinner, you can meet Beast in his study and even see the enchanted rose. Disney really outdid itself with the amazing immersive feeling of this restaurant.

Liberty Tree Tavern serves Thanksgiving Dinner all year round. It’s not surprising then that 1159 people gave it an 87% rating. It’s hard not to love Thanksgiving dinner!

Cinderella’s Royal Table remains one of the hardest to get Advanced Dining Reservations in all of Disney World even though Be Our Guest took some of the strain off. The character dining experience puts you face to face with some of your favorite Disney princesses including Cinderella herself!

Of the 1191 diners surveyed, almost 86% rated it favorably. It seems that people aren’t as impressed as they used to be. Perhaps it’s a bit dated compared to Be Our Guest.

The Plaza Restaurant is a casual dining experience in an elegant Victorian setting. While the décor is fancy, the restaurant is very much family friendly with dishes like loaded fries, meatloaf, cheeseburger, cheesesteaks, chicken, and sweets to finish it off.

While it didn’t fare as well as the others, it could be because the table-service restaurants in Magic Kingdom put up quite the competition. There were 496 returned surveys, and 85% of them were positive.

The Skipper Canteen opened recently filling a void in Adventureland. While this is considered a table-service restaurant, it’s almost like a hybrid.

However, the meals are priced like a table-service restaurant, and the selections reflect that standing as well. You’ll find pork, steak, duck, fish, shrimp, pasta, stew, and desserts plus alcoholic and non-alcoholic beverages.

Skipper Canteen didn’t fare so well in 2016, though. Out of 596 people surveyed, only 81% liked their meals. This could be due to the fact that they opened late in the year and didn’t accept reservations early on. Perhaps they can raise their rating now that they are accepting reservations.

Tony’s Town Square Restaurant consistently ranks the worse on the Magic Kingdom table-service list. Located on Main Street USA, the restaurant may be pretty inside, but the food is less than impressive.

That’s obvious in the 579 diners surveyed with just a 76% positive rating.