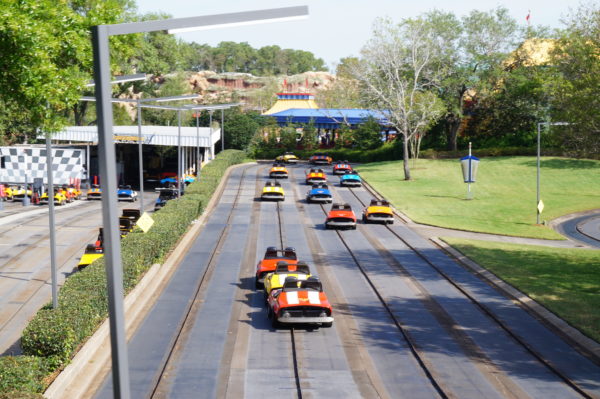 Disney World’s opening day attractions are part of Walt’s legacy and are highly protected among Disney fans. Unfortunately, sometimes those rides interfere with progress. Two such attractions, the Tomorrowland Speedway in Tomorrowland and the Walt Disney World Railroad, must be altered to make way for a new attraction.

Tron is coming to Magic Kingdom‘s Tomorrowland area and will be situated between the Tomorrowland Speedway and Space Mountain in an area not open the public in the past.  The new coaster-style attraction is inspired by the hugely popular Tron Lightcycle Power Run attraction in Shanghai Disneyland, and it will open in time for Disney’s big 50th anniversary celebration in 2021.

The problem is that Tron is going to be quite large and invasive and will impact service on some other attractions – at least temporarily during the construction process. Tomorrowland Speedway is one such attraction. While the ride will not shut down completely, the track will be adjusted until the summer of 2019 when it will reopen as the same ride that fans know and love.

This is a big improvement to rumors that the attraction might have to close completely to make way for Tron.

The Walt Disney World Railroad will also experience a service interruption, but to a much greater extent! The Railroad will suspend round-the-park service and will “temporarily take up residence at the Main Street Station.”

This is a favorite attraction, but it’s also a convenient way to get from the front of the park to the back of the park or vice versa.

Disney says there will be new, special photo ops during the closure though. So while you might not get to ride the Railroad on your winter vacation, you might get some cool shots that you couldn’t otherwise have gotten!

Disney hasn’t announced specific dates for either of these closures yet. They’re only saying that the interruptions begin sometime in December .

Railroad and Speedway service interruptions: will they affect your vacation?