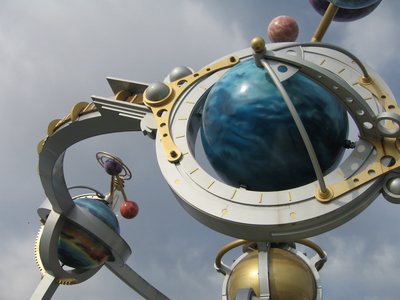 If you read articles on wait times, it’s evident that traffic patterns emerge. Popular rides near the front of the parks have wait times in excess of an hour early in the day that tend to wane by the end as people filter out. In this article, we’ll detail the specific traffic patterns that are most relevant to guests visiting the Magic Kingdom, to help them maximize their enjoyment – and we will share with you a very effective Magic Kingdom navigation plan.

To start off, in times of the highest concentration of visitors such as summer months and major holidays, Frontierland and Tomorrowland get hit the hardest with early day traffic, followed closely by Adventureland, Fantasyland, and Liberty Square. However, during the off months and following major holidays, the day’s earliest traffic is most centralized around Tomorrowland but otherwise is more equally dispersed throughout the park than in ‘peak’ times.

In Tomorrowland, the attractions with the most draw early in the day include Space Mountain and Buzz Lightyear’s Space Ranger Spin. In Fantasyland, Dumbo the Flying Elephant, The Many Adventures of Winnie the Pooh, Peter Pan’s Flight, and the Seven Dwarves’ Mine Train see the biggest wait times early on. Frontierland’s most crowded rides are Splash Mountain and Big Thunder Mountain Railroad, even before 11 a.m.! In Adventureland, the Jungle Cruise teems with teams of tourists trying to take a tour through the tempestuous territories.

The Daily Grind Can Take a Vacation, Too

People who are on vacation are not necessarily divorced from the patterns of their daily lives. Just like on the daily commute to the salt mines, crafty moms and dads attempt to outfox one another by heading to the lanes that are too temptingly open to pass up. Therefore, foot traffic is a lot like vehicular traffic in the park, with top attractions filling up early. This doesn’t last forever, however, as the initial onslaught of visitors vying for advantage ebbs a bit. Then, the eye of the storm figuratively passes, during which time there is something of an eerie calm to the Magic Kingdom.

Around the strike of ten, a tsunami rears up and floods the park again, maintaining its force through to about eleven thirty. This wave, too, touches every shore in the Kingdom, and there is peace among its territories until early afternoon, with visitors congregating in Liberty Square, Fantasyland, and Frontierland as the day progresses.

Late afternoon still sees the Jungle Cruise, Space Ranger Spin and Space Mountain accommodating loads of visitors. The benefit to this continued concentration is that other attractions are relatively easier to get into. First-time visitors who don’t have a touring plan tend to circumscribe the park in a predictable fashion, not deviating from their guidebook or park map; old hands cut through their paths, making beelines for the attractions they like the most.

Does Fastpass Help the Congestion?

We might ask the same of the designers of MassPike. Does the carpool lane help the congestion in and around Boston? The answer is a qualified yes. Yes, Fastpass holders move through line more quickly, especially when doubling up with the ‘switching off’ option. At the same time, many variables go into the equation of which Fastpass is but one part. When issued a Fastpass for a certain interval (let’s say they receive it at eleven and it is viable between one and two o’clock), they will enter into a holding pattern of sorts around that attraction, patronizing shops and restaurants and going on other, lesser attractions. So in effect, it may help the actual line move faster, but a by-product is increased guest presence in the perimeter of the rides.

One unexpected people mover is the holding of a parade. If guests can resist leaving the line to catch one – especially if they have seen it before, they can be rewarded with much shorter wait times. We could write a whole separate chart for wait times in these cases, but it would make the parks look empty!

What is beneficial in the work world is not necessarily so in Walt Disney World. As the day progresses, exits overtake entries as people get hungry and want to enjoy a meal at this hotels, hoping to find less expensive food than what Disney offers inside the parks. These are the same folks who rushed to arrive at nine a.m. and ended up in line with thousands of others who had the same idea.

Savvy visitors will savor their morning coffee, maybe catch some rays at the pool or even enjoy an early lunch at the hotel before going to the park. All Disney resorts have shuttles departing at extremely regular intervals, so there’s never pressure to catch one lest a group be left behind for hours on end. In fact, the most magical hour at Disney World’s parks is the one before closing, when so many have exited and several attractions are still serving visitors. Then, the silence is not the foreboding of things to come, but a special time for families to enjoy what they worked so hard to get with a few less human distractions around.