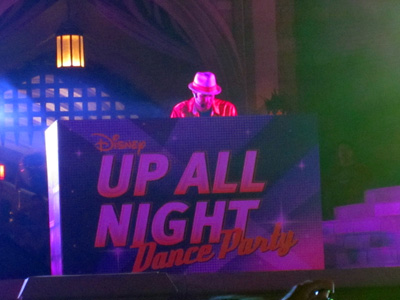 As Disney announced in a press conference where Mike Wazowski took over Spaceship Earth, the Magic Kingdom was open for 24 hours straight from 6am on Friday, May 24, 2013 until 6am on Saturday, May 25 in order to celebrate the upcoming new Monsters University movie and Disney’s Monstrous Summer promotion.

Many different attractions were open during the 24 hours, and Disney had some special entertainment and food offerings too.

Let’s take a look at some of the fun that took place.

Disney added a banner to the train station at the entrance to Main Street USA.

Plenty of people gathered around the stage at Cinderella Castle to dance the night, and morning, away to the modern sounds of a DJ who kept the crowd up and alive. Around 5am, the DJ asked who in the crowd had been at the Magic Kingdom for the past 23 hours. There were an amazing number of cheers from people who had stayed all night.

Disney did sell some special t-shirts to commemorate the event. When I showed up in the early morning hours, I couldn’t find them myself. I’m not sure if the t-shirts were sold out, or if they were just well hidden.

However, I did see these very cool Mike Wazowski sun glasses, complete with three eyes.

Pulling an all-nighter can create quite an appetite. Let’s take a look at some of the special food offerings that were available throughout the park.

Any time that Disney throws a party, it is sure to be a blast. And the Monstrous Summer 24 hour kick off at the Magic Kingdom was no exception.

What do you think about this 24 hours party?