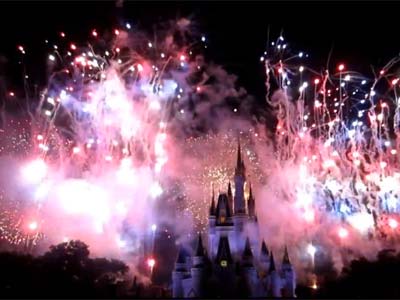 If there is one thing that Disney knows how to do well, it is fireworks. And what better occasion is there to put on a fireworks show than Independence Day?

In 2013, the July 4 fireworks show at the Magic Kingdom is called “Disney’s Celebrate America – A Fourth Of July Concert In The Sky”.

This year the show takes place every night from July 1 to July 7 under the banner of the Limited Time Magic promotion. The show is at 10pm each day except for July 3 and 4 when Disney will present the show at 9pm.

The fireworks show was amazing.

Let’s take a look at a video of the fireworks show, shot on July 2:

Disney is offering several other ways to celebrate Independence Day at other parks too:

Many things are going on at Epcot:

– “The Heartbeat of Freedom” is a special fireworks show tag at the end of Illuminations at 10pm.

– During the day patriotic characters will appear in costume near The American Adventure.

– An expanded cast of the Voices Of Liberty, together with Spirit of America Fife and Drum Corps and Disney characters, will present shows at 12:30, 1:45, and 3:00pm at the America Gardens Theater.

At Disney’s Hollywood Studios you can see a rock ‘n roll themed fireworks show at 10:15pm on July 4.

What do you think about this fireworks show?