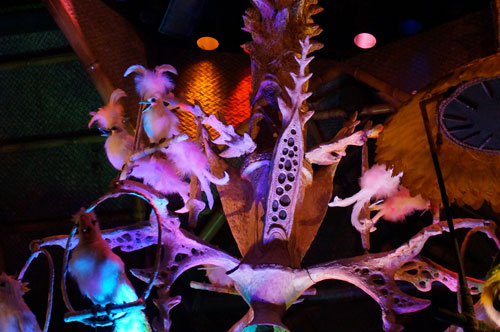 The Merriam-Webster Dictionary says an earworm is a song or melody that keeps repeating in the mind. It can also be used as a verb meaning, “to work its way into one’s mind.” That’s a bit of a scary image!

The term “earworm” was first used in the 1800s, but it gained momentum in the 1990s when people started to refer to catchy tunes as earworms.

There’s often no real way to get rid of this endless loop. Studies have tested vigorously chewing gum or other chewy food, and although this will help temporarily, the earworms have been proven likely to return within the next 24 hours.  Seriously.

Disney has some really popular songs, and these catchy tunes often get caught in guests’ heads as they play repeatedly on some of the most loved attractions.

Magic Kingdom‘s Adventureland is home to Pirates Of The Caribbean, which has a movie based off of the ride then a ride redo based on the movie. Confused? Try to follow along.

Anyway, you might find yourself walking around Disney World singing, “Yo, ho! A pirate’s life for me!”

As we head next to the Enchanted Tiki Room, we can hear the familiar ring of the “tiki, tiki, tiki room.” Famous Disney songwriters Richard and Robert Sherman, known as the Sherman Brothers, composed the song.  This was the first time that a song was written for an audio-animatronic attraction!

You can even find Enchanted Tiki Room souvenirs in most Disney Stores with World of Disney having a large collection of Tiki Room-themed kitchen items!

The Carousel of Progress in Magic Kingdom’s Tomorrowland features one of the most quintessential Disney songs, “Great Big Beautiful Tomorrow.” The song can also be heard in Disneyland’s Innoventions. It was also briefly featured in Horizons at Disney World.

The Sherman Brothers also wrote Great Big Beautiful Tomorrow for the 1964 World’s Fair attraction, Carousel of Progress, and Rex Allan provided the lead vocals. The song highlights the optimism of the attraction, and the Sherman Brothers suggest that the focus of technological advancement in the song and in the ride promotes their perception of Walt Disney and how they believed Walt perceived himself.

If you listen to my weekly podcasts, you’ll recognize this as the closing song. Almost everyone has heard this song at one point or another whether they’re a Disney fan or not, making it one of the most popular Disney earworms.

The last stop on this musical journey is at one of the oldest Disney attractions. Children of the World was first conceived by Walt Disney and WED Enterprises in Burbank, California for the 1964 World’s Fair.

Walt was down to the wire with no song for the attraction when he asked the Sherman Brothers to compose a feature song. They wrote “It’s a Small World (After All),” and Walt was so impressed that he changed the name of the attraction to match the song’s title.

The song, written shortly after the Cuban Missile Crisis, promotes peace and brotherhood and is said to be the single-most performed and translated song on Earth. Per UNICEF’s request, this song has never been copyrighted, and it never will be.

When Magic Kingdom opened on October 1, 1971, It’s a Small World was present in Fantasyland. The song by the same name is catchy, and you’ll probably find yourself walking around Magic Kingdom singing it.