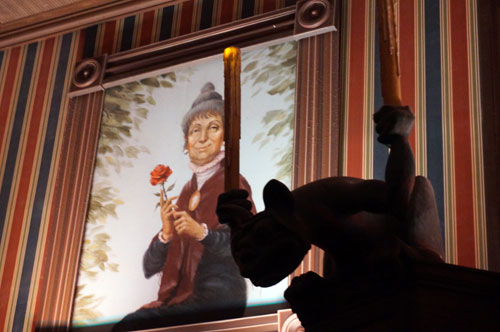 Disney fans have essentially created their own language over the last half-century or so. From “Cast Member” and “Back Stage” to “Magic Band” and “MyDisneyExperience,” Disney has given us new words and phrases to talk about a place we love so much. Speaking of which, we even call Disneyland “The Happiest Place on Earth” and Disney World “The Most Magical Place on Earth.” Even if you know very little about Disney, you’ve probably heard and even used these phrases in your daily life.

There are some other Disney phrases and lines of dialog that are specific to Disney attractions. We hear them in the attractions and we may even say them in our everyday life!

Let’s take a look at the top five classic Disney attraction dialog lines from the Magic Kingdom that have infiltrated our language and warmed our hearts!

The Monster’s Inc. Laugh Floor is the first stop on our classic Disney phrases journey.

Roz is a cranky, old monster who doubts Mike Wazowski’s ability to fill the laugh jar with enough laughs to power Monstropolis. She screams “Wazoooowski” several times during the show, and it almost literally rings in your ears after leaving! I bet you can’t say “Wazoooowski” without a screechy, old lady voice – and a good laugh!

4. “To infinity and beyond”

Next door to the Monster’s Inc. Laugh Floor is Buzz Lightyear’s Space Ranger Spin. The song “To Infinity and Beyond,” which is from Toy Story: The Musical, plays throughout the ride. Since it was originally played when Andy’s toys meet Buzz for the first time in the musical, it’s appropriate to play in Buzz’s attraction. However, most people are familiar with the phrase more so than the song itself.

Next time someone asks you where you’re going, try answering with, “To infinity and beyond” just for fun!

There are 999 happy haunts in Magic Kingdom‘s Haunted Mansion, but there’s always room for one more…

The ride warns you when you’re leaving that you’ve been selected to fill their quota, and a ghost will follow you home until you return!

There’s a good chance that you’ll hear this phrase repeating in your head since it’s the last thing you’ll hear when you leave the ride!

2. “It’s the wildest ride in the wilderness!”

Nearby in Magic Kingdom’s Frontierland is Big Thunder Mountain Railroad.

While you’re waiting in the queue, you’ll hear the phrase “It’s the wildest ride in the wilderness” several times. It’s a fun phrase, and you’ll understand how true it is when you’re on the ride!

You could argue that the monorail doesn’t belong on this list since it isn’t really inside the Magic Kingdom, but it has such a great dialog line that I just had to include it.

When you ride the monorail, you’ll hear this phrase anytime the doors are opening or closing. It means, “Please stand clear of the doors.” You’ll probably even find yourself mimicking the narrator of the monorail!

If you really love this phrase, you can even find lots of souvenirs displaying the monorail and the doors opening.

Do you get Magic Kingdom dialog lines stuck in your mind?