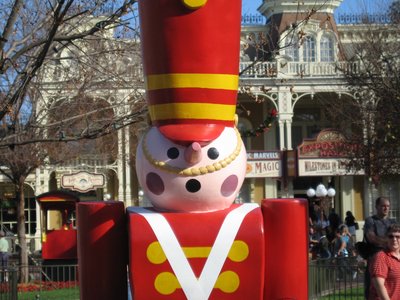 One of the best times to be at Walt Disney World Resort in Orlando, Florida, is during the Holiday Season to be a guest at Mickey’s Very Merry Christmas Party. There is no better way to get into the spirit of The Season than to enjoy Mickey’s Once Upon a Christmastime parade in the Magic Kingdom Theme Park. It can’t be your first instinct to disagree, because the logic is airtight. A Magic Kingdom Christmas is really is a one of a kind Holiday experience that the whole family can enjoy.

Best of Both Worlds

Being at Walt Disney World Resort during the month or so of Mickey’s Very Merry Christmas Party is a treat indeed. During the day, it is like a regular Disney vacation – not that there is anything regular about a Disney vacation. You can still enjoy all of the Disney parks and their most popular attractions. Disney’s Magic Kingdom Park, their Animal Kingdom Park, Disney’s Hollywood Studios and Epcot all run just like normal.

In early December most Disney parks are typically a bit less crowded because of how busy people are preparing for the holidays. Not as many folks can get away for a vacation during this time either because of time or money constraints.  However, just before Christmas, and between Christmas and New Years (when all the kids are out of school), all the parks are very full.  Prepare yourself mentally. Remember that there are fewer people in the separate, evening event of Mickey’s Very Merry Christmas Party, so you can avoid some lines and enjoy some special treats that this party has to offer – even in the very busy weeks immediately before and after Christmas.

Besides the fact that during the day you get to enjoy all that Walt Disney World Resort has to offer as per the usual, you also will find yourself enjoying the weather – warm, sunny and pleasant, as opposed to whatever blizzard state your flew in from. Now, during the day you’re thinking that’s great, but of course, at night, while you are watching the parade, you’re wondering how you could ever fully get into the holiday spirit without snow? Well, it just so happens that during the party and parade, there is a magical snow fall. This inexplicable snow will have you rubbing your eyes and blinking in confusion, not quite believing that it could really be there – just like a kid who catches Santa leaving gifts under the tree.

So, you’ve never been to Mickey’s Very Merry Christmas Party? Not sure what to expect? How about complimentary cookies and hot cocoa while you watch special holiday stage shows?  Not enough? Okay, how does listening to spirited Disney renditions of holiday melodies and taking in fireworks cascading across the sky behind the Cinderella Castle, which is lit up in over 200,000 Dream Lights, making it twinkle as if it were covered in a sheet of ice? Sound pretty darn magical? Of course it is. A special event for the Christmas holiday hosted in the most magical place on earth would kind of have to be. Did we mention that many of the Magic Kingdom’s popular rides and attractions are open during the party? You can take a spin in a tea cup on the Mad Tea Party ride, watching all the lights streak across your vision, as if you were spinning in place near a giant Christmas tree!

While it is true that many theme parks and resorts offer special events for the holidays, few have the perfect balance of spectacle and heart that makes you feel like you really are part of a gigantic family Christmas party. Other parks may offer a special ride, or a holiday show, or a parade, but few have all of the above and much much more like Mickey’s Very Merry Christmas Party does. Did we mention the complementary hot chocolate and cookies?

It is in the small details, as well as the big ones that Disney’s holiday party, and of course their Once Upon a Christmastime parade, distinguishes itself. Things like cocoa and cookies, on the surface seem trivial, but if you think about it harder; what would a Christmas celebration be without Christmas cookies? There’s another detail Disney nails is its decorations during this time. As mentioned previously, the Cinderella Castle is decked out in over 200,000 dream lights, as are some of the other rooftops on Main Street USA, giving the illusion the the park is covered in a blanket of snow. The floats in the parade also sport lights, giant candy canes and cookies, snow, reindeer, Santa and other holiday decorations. Even your favorite Disney characters don special holiday apparel. Part of the attraction to Walt Disney World Resort during November and December is the décor.

The biggest detail of all, the crowning moment during the parade, and during most nights at Walt Disney World Resort, is of course, their fireworks show. Kids and Adults alike will be in awe and wonder of the Holiday Wishes: Celebrate the Spirit of the Season fireworks show. Following traditional Christmas colors and themes, the show will light up the sky with giant red poinsettias, splashes of green and white sparkling snow fall – now that is holiday entertainment! The best part? You get to enjoy this breathtaking display during the party hosted by your favorite Disney character, and everyone else’s too – Mickey Mouse!

Now of course, you’ve accepted that the best place to be around the holiday season is indeed Mickey’s Very Merry Christmas Party in the Magic Kingdom Theme park at Walt Disney World Resort in Orlando, Florida, but you’re worried about the cost. As with any time of year, booking a vacation package, specifically a Magic Your Way Vacation Package, saves your 30% to 50%, or more if you can combine it with one of Disney’s additional special offers and discounts – the Armed Forces Discount, the Florida Resident Discount and their special limited time offers, to name a few. While the cost of a ticket to Mickey’s Very Merry Christmas Party is not included in your vacation package, it is affordable by only being one night of your vacation. It is not an extra fee per day, just one, for one day, and really – it is worth it. Watching the magic snowfall on the Once Upon a Christmastime parade sipping cocoa and munching cookies with your loved ones is a priceless experience.