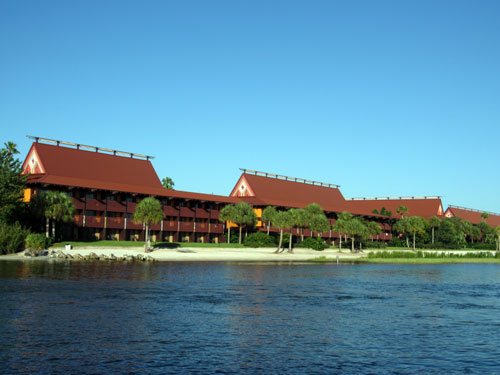 Millions visit the Disney Parks in Orlando every year, but do they get the full experience if they stay off property?  Many say yes and have no problem driving the pack in each morning after a hearty breakfast, grabbing a tram to the entrance and traveling back out after a good day of Disney Magic!

However, many of us who have vacationed in a Disney resort tend to do so again and again and again. Why? Because we know that once we’ve had that experience, there likely isn’t anything that can top it.

If you are a Disney fan and have never stayed inside, the following might tempt you to finally take the plunge.

Let’s review the Magic Kingdom resorts, and check out a few little-known facts along the way.

About The Resort: Since 1971, the shores of Seven Seas Lagoon have lapped onto her shores.  She is home to Tonga Toast and Luau Cove. She is one of the originals and is still one of the best.  Disney’s Polynesian Village Resort or “The Poly” is known for its fantastic food, clean casual Pacific Island feel and traditions for many Disney families around the globe.

Little Known Fact: Resigning President Richard Nixon claimed he was “not a crook” at the Contemporary Resort in November of 1973!

Situated with an excellent view of Cinderella’s Castle, Space Mountain, and nightly fireworks, this resort pays homage to the Grand Canyon and the American Southwest.

One of my favorite things growing up was visiting their game room and arcade, one of the best ever!  Ths resort offers many diversions, including a water slide, artwork, shopping, and dining – including the world-famous California Grill.

About The Resort: If you don’t feel or say wow when you first see this beautiful Victorian themed Resort, you will when you walk in.  Adorned with artistically designed floral arrangements, this gorgeous place is just oozing with class and elegance. You almost don’t want to touch anything until you feel that Disney warmth when the staff greets you.

This Resort is home to Disney’s Fairy Tale Wedding’s Pavilion and to two of Disney’s gastronomical gems; Citrico’s and Victoria & Alberts.  There is high tea. Live piano, jazz and ragtime music is played daily.

Little Known Fact:  The Hoop-Dee-Doo Revue is one of the longest-running live shows in the United States – 45+ years and counting.

About The Resort: So many of us love to hit the open road and a new generation is now enjoying camping! Walt Disney World has a dedicated place for those of us who can’t resist a campfire or a walk through nature.

The resort also features some great entertainment.  The Hoop-Dee-Doo Musical Revue that has been set in Pioneer Hall and entertaining folks from all over for over forty years!  Join Claire de Lune, Johnny Ringo, Dolly Drew, Six Bits Slocum, Flora Long, and Jim Handy for a couple of hours of song, dance, and puns until you can hardly bear it! Family style buckets of bbq ribs and fried chicken are almost as good as the STRAW-BERRY-SHORT-CAKE!

Disney’s Fort Wilderness surrounds you with the outdoors and wildlife including deer, rabbits ducks and armadillo and also allowing your pets along for the ride with its pet-friendly policy.

There is a pool with a water slide, archery, horseback riding and other recreational outdoorsy things that help combine your style of travel with the Disney vacation experience.  There are fully equipped campsites that can accommodate anything from a tent to a 45 foot long RV and also bus-sized A Class vehicles.

About The Resort: Walk right into America’s Pacific Northwest with a stay at this Magic Kingdom Resort! With it’s nod to the turn of the century National Park Lodges, this resort brings the sights, sounds and smells like only Disney can.

Copper Creek Springs Pool is one of the many ways to relax and enjoy the wide-open spaces like walking trails and pine forests that bring nature to your Disney style!

The majestic lobby with its 55-foot totems, hearth, and fireplace is just incredible to see.

Storybook Dining at Artist Point with Snow White is a favorite and other dining options do not disappoint with Geyser Point Bar & Grill and the Whispering Canyon Cafe’.

This resort puts you in the mood to explore and enjoy the history of Native American cultures and early American pioneers and you can actually watch a geyser erupt at the top of each hour.

These Magic Kingdom resorts have grown and evolved over the years. Renovations have been made but much of the “like home” feeling is still there.

Leaving the park at the end of the night and not having to worry about finding or starting a car might be one of the favorite perks of staying on property.  However, it is the service, the amenities, and of course, the sights, sounds, and smells of some of the finest resorts in America that keep us coming back.

Which Magic Kingdom Resort is your favorite?