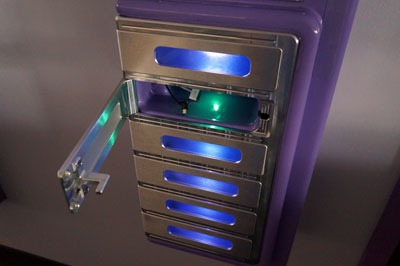 Now that everyone is using FastPass+ to make and manage their ride reservations, it seems that people are using their mobile phones more than ever at Disney World.

In a way that represents great progress. You can now make and change your attraction reservations from anywhere in the park, and you don’t have to run around to all the old FastPass machines.

However, in a way it is a bit sad too. We now seem to be staring down at our phones instead of looking around at all the great details and atmosphere that Disney has created for us.

Regardless of whether we love the technology or hate it, it seems like it is here to stay.

There is also one unavoidable consequence to all this use of our phones: we will drain the batteries on our phones even more quickly.

Disney has added new lockers that allow you to charge your cell phone in the Magic Kingdom.

The first set of phone charging lockers are in Cosmic Ray’s restaurant, just inside the entrance from Fantasyland.  Let’s take a look:

How do the Phone-Charging-Lockers Work?

You use your credit card to secure access to a locker, but there is no charge for the service.

On a touch screen, you select the type of phone you are using: Andriod, iPhone, or Blackberry. Sorry if there are any Windows Phone users out there. Connect your phone to the cable inside the locker and close the door. Come back later, and a light will show you that your phone is charged.

Each locker can hold only one phone, and the lockers are not big enough for tablet devices.

A friendly Cast Member at Cosmic Ray’s told me he talked with the two people who designed the new phone-charging locker system.  Disney is running this as a test through mid-summer.  So far, people have been a bit reluctant to use the service because it is connected to a credit card.  As mentioned above, the credit card acts as a key and you do not get charged.

The Cast Member also said that Disney would like to enhance the system to tie it to your admission ticket / MagicBand, so it will be more convenient.

Also, here is a tip: if you decide to use these lockers, you can put your phone on airplane mode and it will probably charge faster.

Do you like the ability to charge your phone in a locker in the Magic Kingdom?
Leave your comments below.