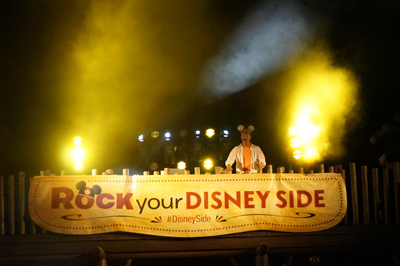 For all kinds of folks – early birds, night owls, or those who simply can’t get enough of Disney magic – Disney celebrated the start of the summer season with some pretty crazy operating hours.

The event started with an extra-early welcome ceremony.  Guests showed up as early as 4:45 AM for the fun.

Mickey Mouse and Minnie Mouse joined with Disney villains and heroes to open the park in an expanded welcome ceremony at the Main Street USA Train Station.

[video_youtube video_url=”http://www.youtube.com/watch?v=6pv6LtZm4BY” width=”480″ height=”360″]
Throughout the day, Disney put on its usual assortment of parades – just a bit more often. The Festival of Fantasy parade made two appearances, and the Move It! Shake It! Celebrate It! Street Party boogied down Main Street USA three times. The Main Street Electrical Parade lit up the night twice, at both 11:00 PM and 1:00 AM.

No all-nighter would be complete without some food and drink to give you energy to push through.

Disney delivered with an Olaf specialty beverage served in a souvenir cup at The Lunching Pad and The Friar’s Nook. There were also plenty of cupcakes and breakfast options around the park.

For those who truly wanted to party the night away, the “Up All Night” dance party took place in front of Cinderella Castle from 2 AM to 5:45 AM. A Frontierland Dance Party also ran during the same hours.

The day started out with hero meet and greets around the park, but as the night went on the Disney villains took over.

Disney capped off the excitement early on Saturday morning with a “kiss goodnight” at 5:50 AM on Main Street USA.

Do you like it when the Magic Kingdom is open for 24 hours straight?