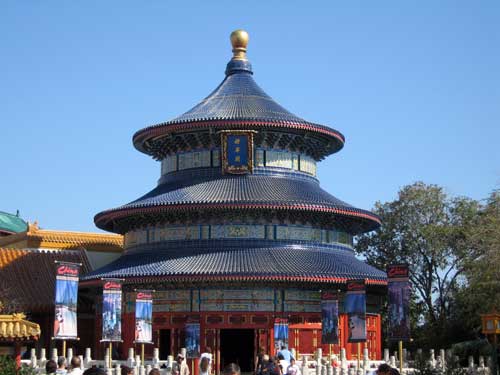 China is one of the largest and most popular pavilions in Epcot‘s World Showcase and for good reason.

With its traditional cuisine, entertainment, and architecture, the China Pavilion really immerses guests in a uniquely Chinese experience.

As you enter the China Pavilion, you’ll pass under the Paifang Gate, which is a traditional structure signifying the top two divisions of Chinese administration. Straight ahead, you’ll see a replica of the Temple of Heaven, which is built to ½ scale. The original three-tiered circular structure in Beijing is 800 years old. Disney’s version features the Hall of Prayer and the entrance to Reflections of China, which we’ll discuss later. As an added perk, the Temple of Heaven is also air-conditioned- a nice respite from the hot Florida sun.

The atmosphere in the restaurant is also traditional with Chinese lanterns, woodcarvings, and glasswork all set in a dim lighting. It’s an interesting fact that nine is considered a sacred and lucky number in China and is associated with emperors, dragons, and architecture as well as important dates. The number nine represents harmony in Chinese culture.

If you don’t have time to sit down for an hour-long lunch or dinner, the Lotus Blossom Café is a quick-service location situated just behind Nine Dragons. Coincidentally, the Lotus is also the symbol of the World Showcase signifying harmony, peace, and togetherness.

The Lotus Blossom Café is a counter-service restaurant serving up egg rolls, pot stickers, vegetable curry, fried rice, and sesame chicken, among other things. This establishment is affordable, plentiful, and satisfying for lunch or dinner.

Disney’s 1998 feature film, Mulan, follows a young girl who fights for her country and becomes a skilled warrior, and you can meet her in the China Pavilion outside of the Temple of Heaven!

Disney’s movie is based on a true story of a girl named Hua Mulan whose elderly father was set to fight in the army when she took his place. She became very skilled and highly respected but refused to accept any recognition or reward for her achievements.

The Chinese have a long history of performing arts dating back to at least the Qin Dynasty (221-207 BC) including illusion, acrobatics, wrestling, music, dance, martial arts, horsemanship, and juggling. These shows were popular among common people making them easily accessible to all levels of society. Over time, these performances and the performers have gained respect.

Performing arts continue to be a popular form of self-expression in China, and the China Pavilion honors this tradition with the Jeweled Dragon Acrobatic Troupe from China. These talented performers impress guests with challenging acts of strength, agility, and balance. They perform several times daily usually in the afternoon every hour on the hour. Check the times guide or the Disney app for show times.

World Showcase’s China Pavilion has one of the largest merchandise stores in Epcot: The House of Good Fortune. Here you can buy traditional Chinese souvenirs such as lanterns, hats, wine, jewelry, clothing (including silk robes), china, and Buddha statues. There is also an open-air stand called Good Fortune Gifts with a smaller selection of items. Customize your very own Chinese parasol or pick up a marionette animal puppet. Either way, you’ll have a great souvenir for yourself or a gift for someone special.

“Reflections of China” is a 13-minute film inside the Temple of Heaven. The circle-vision screen allows for a fully immersive experience looking at the landscape and major cities in China. Guests will learn about the sights and sounds of modern China and gain a new appreciation for the rich culture of the Chinese.

The Joy of Tea is a freestanding quick-service location that is often overlooked as “just a tea place,” but this is far from the reality. Though they don’t have much selection, what they do have is quite tasty and satisfying!

Food offerings include BBQ Chinese Pork Buns, Pork and Veggie Egg Rolls, and Curry Chicken Pockets. If you can’t decide, try all three with the Lucky Combo, which includes a drink and strawberry red bean or caramel ginger ice cream!

Are you a fan of the China Pavilion at Epcot?