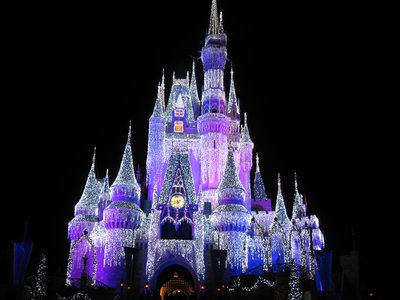 Christmas traditions are a part of many families. Whether it revolves around someone playing Santa Claus and passing out the family presents, to the types of food you eat (or do not eat) on Christmas Eve or Day, traditions are a major part of everyone’s holiday season. We see it start on Black Friday, when the hectic shopping season officially starts, and it ends with the Time Square ball dropping. People depend on these traditions, and they rely on them as a sign of the time.

Sadly, some traditions fade into the darkness of our memories, some willing to return and others not. The Christmas season is one for reminiscing about our past and for many of us that past is entwined with trips to Walt Disney World during the holiday season.

Walt Disney World is known as the place to go for the holidays. The decorations, attention to detail and spirit of the season permeate the property. From the music to the soapy snow falling down Main Street, there is no place as picturesque and lovely to see. Through the years we have seen expansion of this spirit, from the simple to the extravagant, from Mickey’s Very Merry Christmas Party to Jennings Osborne’s Spectacular Spectacle. These changes have been met with thunderous applause and happy faces. These changes have been epic, and they have helped to bring people closer.

There is a distinct difference in the air on property during this season, as people prove that the season of giving is not limited to just their homes and families.

Some of these lost traditions were necessary, and some may see returns in the coming years. It is always good to look back on things lost during the holiday season as they allow us to cherish what we have, even if we are talking about Walt Disney attractions and experiences.

One of the most beloved parts of the Christmas season in Walt Disney World is Mickey’s Very Merry Christmas Party. The party, which has become an annual celebration in Magic Kingdom has evolved from only a few select nights in the early days to a regular occurrence in November and December. The decorations have continued to grow, especially with the addition of the Cinderella Castle Dreamlights.

Though the party has stayed mostly the same, there have been a few changes through the years. The portrait locations have ceased operation, where Disney photographers would take photos of your family and mail them home with the party and date across the bottom.

There have been changes made in the Christmas parade lineup, as well as the music, though guests have met many of these changes with high praises.

There was once a multitude of Disney characters roaming the parks, and just popping out for some autographs and pictures. This was especially apparent at the Christmas Party as many characters were dressed in their holiday best. This still happens, but with less regularity, and in specific locations met with long lines. Sadly as the park going experience has evolved, there has been a loss of spontaneity.

One of the highlights of the holiday season was the inclusion of the Country Bears Christmas Special. Staring in 1984 as an escape from the everyday show, the overlay featured the identical cuts and lineup, so as to make the transition simpler. The festive music, coupled with many decorative additions (notably Max and his red light bulb, Melvin and a string of lights on his head and Buff wearing a Christmas hat) really got guests into the spirit. The Five Bear Rugs highlights the show with a new song “Tracks in the Snow” as well as “Deck the Halls” and other traditional numbers. The show featured Wendell singing “Blue Christmas” and Big Al famously sitting in a diaper trying to sing about “Another New Year.”

The show was discontinued in 2005, and though rumors persist that is may eventually return, this year sadly was not that time. Rumor has it that the reason the show has not been seen since 2005 was because the budget set aside for the conversion was used for the Dreamlights. This seems a bit far-fetched, but possible explanation to the missing holiday show.

Disney’s Hollywood Studios has been known for its holiday “Griswold” Christmas display, though it is actually a product of Jennings Osborne. The Osborne Spectacle of Lights has been a major draw in Disney’s Hollywood studios since 1995. Now as we see the display today along Streets of America, with its dancing effects to music many of us may not remember where it first was displayed.

From 1995 until 2003 the display was located on Residential Street, where the facades of the Golden Girls, Empty Nest and others were decorated top to bottom in lights. The Backlot Tour Trams would stop running before sunset, and the walking tour began, allowing guests to see the lights as Jennings Osborne presented them in his hometown of Little Rock, Arkansas. This move was necessitated by the construction of Lights! Motors! Action! and the demolition of Residential Street entirely. Imagine the sight of seeing the Spectacle “dance” to Trans-Siberian Orchestras “Christmas Sarajevo” down Residential Street.

The holiday season in Walt Disney World is an exciting and memorable time to visit the resort. Some people make it their specific time of year to vacation. Its beauty and atmosphere cannot help but put people into the spirit of Christmas. For what has been lost, some was necessity, some has been expanded and “plussed up”, and some we hope to see again. One thing cannot be challenged – there is no place like Walt Disney World to celebrate the holidays with friends and family.