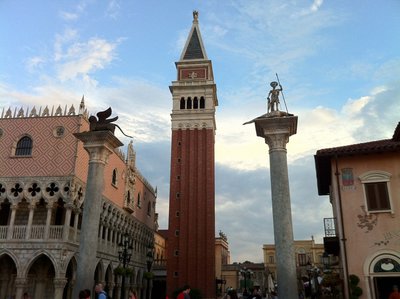 Look Up As You Step Into Italy

Disney Imagineers tend to be a detail-oriented bunch. Down to the smallest flourish, everything you see in a Walt Disney theme park was added with creativity and intention – and is mean to tell a story. The country pavilions at Epcot’s World Showcase are some of the best places to appreciate this attention to detail and admire the history, design, and craftsmanship of Disney World.

Even without understanding the context of the imagery around the World Showcase, it is possible to appreciate the results just based on their beauty alone. But when you do know the history behind the World Showcase features, it makes the experience even more enjoyable.

History The Way Only Disney Can Tell It

Italy is one of the most beautiful pavilions at the World Showcase, with re-creations of architectural icons from one of the most beautiful cities in the world – Venice. With the elegant façade of the Doge’s Palace, the towering beauty of St. Mark’s Basilica, and the aroma of Italian cuisine beckoning, it is easy to cruise right past the two columns that mark the entrance to Italy. However, these columns have important historical and cultural significance to Italy, and are worth stopping to admire.

The two columns, and the statues that sit atop the columns, represent two major influences in the current cultural landscape of Italy. One of those influences is the long-extinct Byzantine Empire, and the other is the still prominent presence of the Roman Catholic Church, of which the Italian city of Rome is the heart.

A Bit Of Interesting History

At the height of the Byzantine Empire, Venice proclaimed its allegiance to Constantinople by declaring Theodore of Heraclea to be its patron saint, and erected both a church and a statue in his honor. Theodore is an important martyr and saint in the Eastern Orthodox Church who lived and died in a city that lies in modern-day Turkey.

Gradually, the influence of the Roman Catholic Church began to grow, and the center of power shifted from Constantinople to Rome. Sensing a change in the winds, Venice decided that it would be wise to adopt a patron saint who was more prominent in the Roman Catholic tradition. They chose St. Mark, and erected a church and a statue in his honor just as they had done for Theodore of Heraclea. This new statue was in the form of a winged lion.

According to Christian tradition, St. Mark the Evangelist recorded the Gospel of Mark from the teachings of Peter. He later founded the Church of Africa and became the Bishop of Alexandria. Remains believed to be his were eventually taken from Alexandria and brought to Venice, where they now live in St. Marks’s Basilica. Some people believe that St. Mark’s head remains in Alexandria, but Venice is generally accepted as the home of the saint.

Check Out These Columns Next Time You Visit

Representations of these two statues now greet Disney World visitors as they enter the world of Italy. While these free-standing columns may seem like random additions to Italy when compared with the detailed building replicas beyond, they are a tribute to Venice and Italy’s place as a crossroads of the world.