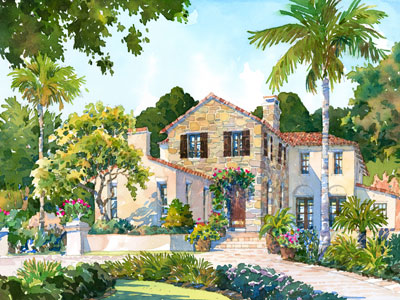 Got An Extra $2 Million? You Can Live Next Door To The Magic Kingdom

A while back we asked a simple question: Would you move to Florida to be close to Disney World?

Many people gave a resounding yes. Some already had plans to move, and some have actually made the move to Florida already.

What if you could live literally next door to the Magic Kingdom, in a housing development designed and developed by Disney? What if you had access to special VIP services and events in and around Disney World?

It can all be yours, if you have the money.

Golden Oak – For Those With Lots Of Gold

Disney is selling luxury homes priced between $1.5 million and $8 million in their “Golden Oak” housing development. Some people will choose to live in these estates full time, while for others, it will be a second or third home that they just use on occasion. Each home will be owned and used exclusively by an individual. Eventually the plan calls for 450 houses as well as an upscale Four Seasons hotel.

Some consider this to be a risky move. After all, housing prices in Orlando fell up to 50% from their highs during the real estate bubble. Plus, Florida has had one of the highest foreclosure rates in the United States, and, with homes that cost millions, Disney will be selling real estate at the top of the Orlando market.

Just what do you get for your millions? Access to a clubhouse, parks, walkways, and views of conservation areas. Lots are generally sized from one-quarter to three-quarters of an acre. Owners can use their own architects, but Disney has rules about what materials and architectural designs owners may select.

It seems Disney believes that it has room to grow in the luxury market. They have added VIP tour guides and wine tasting events in the past with great success.

It is hard not to draw parallels to Disney’s other city-development project, Celebration. Disney set aside nearly 5,000 acres of their land across Interstate 4 from the theme parks and resorts, and then designed and developed a new city in the 1990s. Some say this was the fulfillment of Walt’s final dream: an experimental community;  a real place where people live and work.

Overall, Celebration has about 6,000 houses. Disney was actively involved in the initial development of that city, but now has turned over most management and maintenance functions to the residents. Aside from some office space that Disney owns for its businesses like the Disney Cruise Lines and the Disney Vacation Club, Disney doesn’t have much to do with Celebration any more. That is in line with the original plan Disney had to manage the development, and then turn over the city to its residents.

While some people might see a connection in that Disney is building out a second housing development, this is definitely not Celebration 2.0.

Celebration was designed from the outset to be a city, complete with a public downtown, a hospital, churches, schools, and shops. Disney also designed the city to accommodate a range of incomes, from relatively affordable rentals to large homes. In addition, the vibe of Celebration is small town America at the turn of the century – homes on small lots and easy walks from place to place.

Golden Oak will be quite different. It will be a private, gated community. There won’t be much diversity in incomes because its residents will all be rich, and the homes will have plenty of breathing room, as opposed to the tightly clustered homes in Celebration.

Should Disney develop houses for the ultra rich?