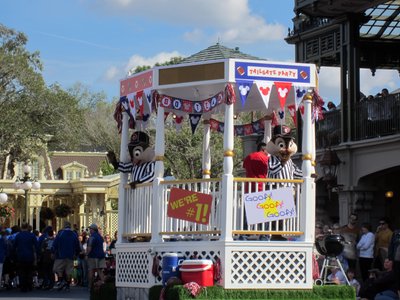 Disney’s Limited Time Magic promotion continued in the Magic Kingdom, with a tribute to Super Sunday (according to Samsung I guess we can’t actually say “Super Bowl” because that term is trademarked, but that’s another issue altogether).

Shortly before the Celebrate A Dream Come True parade took place at 3:00, a short football-themed introduction took to the streets. It started with football players carrying a banner, followed by some very enthusiastic cheerleaders revving up the crowd. Sports Goofy dressed up as a football player then came by, riding in the back of a snappy red convertible. This was followed by some more sports fans, and finally a gazebo with Chip and Dale dressed up as referees.

The entire event took about two minutes, and played February 1-4, 2013.

Plus Some Super Food

In addition to the short parade bonus, Disney was also serving up lobster bisque and tomato basil bisque at Cosmic Ray’s in Tomorrowland. A tribute to the Super Bowl with a bowl of soup. Get it?  The soup is available February 1-9, 2013.

What do you think about Countdown To Super Sunday?