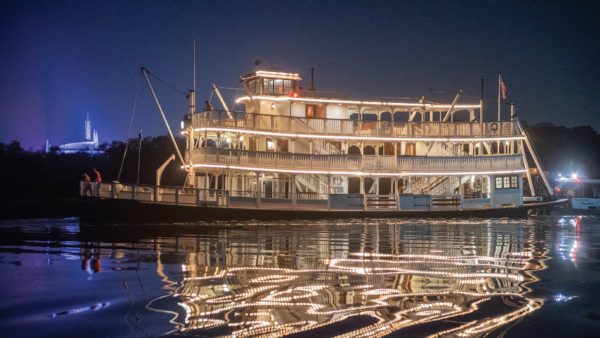 The Magic Kingdom started a refurbishment of the Liberty Belle and the Rivers of America section of the park in Fantasyland in order to replace the underwater track that guides the ship.  Yes, the ship runs on a track.

While the Rivers of America was drained, Disney relocated the ship to dry dock for maintenance.  Last night, the ship made a very special voyage to return to its rightful home.

The Liberty Belle sailed through Bay Lake and the Seven Seas Lagoon, past Disney’s Contemporary Resort, and was towed through a narrow water channel.  I believe the channel was the one that typically holds the units for the Electrical Water Pageant, just west of the Magic Kingdom.  That channel connects the Seven Seas Lagoon to the Rivers of America.

The Liberty Belle is once again back parked in Liberty Square, ready to welcome guests.

Check out this video of the ship’s voyage:

It took more than 100 cast members to complete the four-month project.  In addition to replacing the track at the bottom of the river that guides the ship, Disney also enhanced the rockwork in the area and updated landscaping and paint.

Glad to see the Liberty Belle back in the Magic Kingdom?