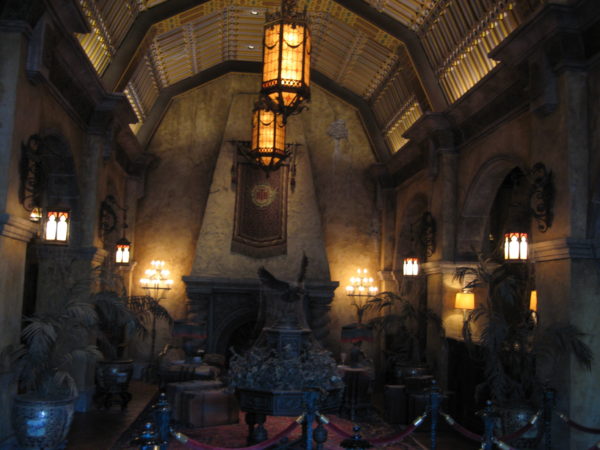 Simple enough? Check out my opinion, then let us know what your three favorites are in the comments section!

Even with the advent of the FastPass+ system, the lines (or queue) at some Disney attractions can take hours to get through. As the Park’s crowds grew larger, so did the lines to do many of the activities at Disney World. Imagineers needed a way to make the attraction queue part of the ride’s experience.

At first, there was a push for pre-shows that included video, audio, or museum-like displays.

Next, the Imagineers implemented more interactive features that gave guests a chance to activate and control gags and other activities.

Most recently, Disney has found a way to make the attraction’s queue part of the ride itself (most notably with Star Wars Rise of the Resistance).

Today, a Disney attraction is expected to have a fun queue with things to help pass the often-long wait and help solidify the immersive aspects of the attraction. Here are my “Pick Three” for favorite Attraction Queues.

If you’re familiar with the average wait times for attractions at Walt Disney World, you surely know that Peter Pan’s Flight routinely has well over an hour-long wait. The irony in the long wait time is that this attraction has one of the shortest run times on property and is one of the original Magic Kingdom rides. Imagineers needed to find a way to keep riders engaged with the attraction during their 75+ minute wait. An overhaul of the attraction was not an option, so it was decided to incorporate a new idea: interactive queues.

The new queue would allow riders to walk through scenes of Walt Disney’s Peter Pan and interact with a number of in-queue activities (some through a smartphone app).

The implementation worked out great. Although not having a FastPass+ selection for Peter Pan’s Flight anytime after mid-morning may tie you up for 60+ mins, experiencing the attraction’s Stand-By queue may just make it worth it!

Like Peter Pan’s Flight, Frozen Ever After routinely has extended wait times. The attraction has easily become one of the “rope drop” destinations at WDW, and for good reason. Although Maelstrom will forever be in my heart, retrofitting the attraction with the Frozen overlay has been an overall success.

One of the highlights of the attraction has been the queue. Frozen Ever After may be lacking in the hands-on interactions that Peter Pan’s Flight features, however, the theming of the queue is one of the best. Once inside Frozen’s show building, you will notice that there is a split between what was built for Frozen Ever After and what was a holdover from the Maelstrom days. As you round the corner and near the loading area, you see many buildings and features (to scale) that will make you feel as if you’re somewhere far away from sunny Florida.

Each time I am in Frozen Ever After’s queue I find something new to look at it.

I may sound like the stereotypical old man here, but when it comes to Disney attraction queues “they just don’t make ‘em like they used to.”

Hollywood Studio’s Tower of Terror has only been around since the 1990s, but it’s still one of the best examples of Imagineering magic. The queue for ToT puts you on the grounds of the Hollywood Tower Hotel. As you wait to enter the “Twilight Zone”, you’ll tour the spooky hotel, eventually making your way into the lobby.

One look around and you’ll see the amount of detail in the attraction, and for the most part all without the use of phone apps, technology, or interactive gags. Although there is a short pre-show video, the Imagineers are able to sends chills down your spine with their use of antiques, spiderwebs, and dust. The Tower of Terror remains one of my favorite queues at WDW.

What are your three favorite attraction queues – one per park?