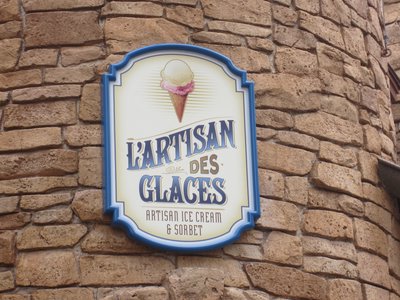 Disney has been reworking the food options in the France pavilion for some time now. The most recent was the opening of the Boulangerie Patisserie Les Halles.

Now the next step on this delicious journey is here – the opening of the L’Artisan des Glaces Sorbet and Ice Cream Shop.

Let’s take a look at this new location:

The exterior of the shop has been reworked and fits right in with the French theme.

The dimensions of the public area of the shop seem similar if not unchanged, but unlike the old pastry shop which squeezed serving lines on both sides of the space, the new ice cream shop has just one serving counter opposite the windows. The new layout, together with natural light from the windows, the bright colors, and white-washed beams, make this a more inviting space.

But enough of the building. Let’s get to the food.

You can order one or two scoops, in a cup or a cone.

The ice cream tastes as good as it looks. It is thick, rich, dense, creamy, and overall yummy. As all ice cream should be.

What do you think about this new ice cream store?