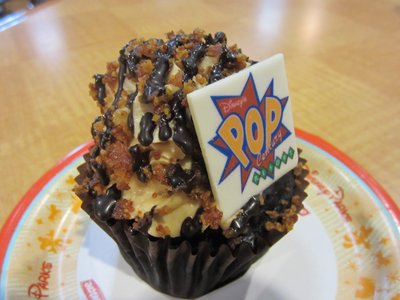 The King Cupcake At Disney’s Pop Century: Bacon Plus Chocolate?

On The Menu For Elvis

Apparently Mr. Presley enjoyed eating peanut butter, banana, and bacon sandwiches. So why not make that into a cupcake?

Disney’s version of the King’s favorite is a chocolate cupcake filled with a taste of banana custard. On top you will find whipped and creamy peanut butter icing. It’s then covered with candied bacon bits and chocolate drizzle. Add a square of white chocolate with the Pop Century logo printed on it, and you’ve got yourself one hunka hunka burning (cup) cake.

The cost of this tribute is $3.99, which seems pretty standard for signature cupcakes.  That is the same price you will pay for the Chocolate Coconut cupcake at the Contempo Cafe. And it’s definitely cheaper than the budget-busting $9 pirate cupcake.  You can also use a snack credit to get this fine desert if you are on the Disney Dining Plan.

This was my first experience with candied bacon. I guess it is pretty trendy these days. For me, the bacon mostly added a salty taste, which is a good thing when paired with the peanut butter icing. Personally, to me it didn’t really taste much like bacon – but it did smell like bacon. I overheard someone say that they should have stuck half a stir of bacon into the cupcake itself! Now that would be real bacon flavor.

Overall I enjoyed the novelty of the cupcake, and the taste was good. I would recommend that you try it at least once. After all, it’s a cupcake fit for a king.

Should cupcakes – like The King cupcake – have bacon on them?