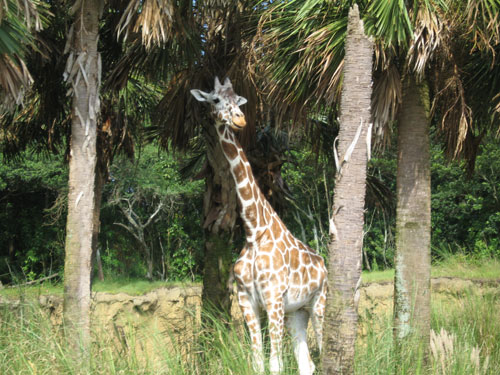 One of the reasons I love this attraction is because it’s different every time I ride. Where I sit, who the driver is, what the animals are doing, and when I ride all have an effect on how I experience the attraction.

A lot goes into making the safari work, so let’s take a look at ten interesting facts about Kilimanjaro Safaris!

10. There are dozens of animals to spot

There are officially thirty different animals and birds pictured on the chart that can be found above the driver. These animals fulfill a lot of superlatives including the largest land animal (The African Elephant), the fastest animal (the cheetah), the biggest horned animal (Ankole Cattle), and the rarest animal (the endangered Black Rhino).

You might even spot a black vulture, though they’re not supposed to be in the attraction. They’re native to Florida and sometimes make their way in. I guess it’s the place to be!

Well, some of them are. The “acacia” trees are actually Florida Oak trees that are trimmed to have a flat top so they look like trees that would appear on the African Savannah. They aren’t actually acacia trees, which wouldn’t fare in Florida winters.

The huge Baobob Trees are not real. These trees are concrete versions of what would appear on the savanna. They look like they’re upside down, and their leafless limbs look more like roots than branches. However, Cast Members use these trees to store food and other supplies to care for the animals and maintain the safari.

If you want to see a live Baobob Tree, head over to Tusker House. There’s one outside of this restaurant.

8. The rickety bridge is an illusion

The bridge that you cross during your tour seems to be supported only by stilts that are about to give way at any minute. Your driver might even make a big deal of slowing down to see the crocodiles but then hurrying up since the bridge is about to collapse. In fact, the “rickety bridge” is only activated when the driver slows to five miles per hour or less. If there’s a reason that he or she can’t or won’t slow down, the bridge doesn’t activate.

7. The zebras are bullies

The zebras were brought in together to avoid problems in the herd. However, they became aggressive towards each other and even started biting at the vehicle tires. They were also bullying a baby antelope. Disney decided to remove the zebras from the safari to allow them to calm down and acclimate to their new environment.

In the fall of 2012, they were finally allowed back on the safari, and tourists could see them once again.

Imagineers carefully designed each section of the safari specifically for the animals that would be living there. They are contained to their own area for the safety of them and of the guests. If the animals were truly allowed to roam freely, they would do what comes naturally and they would hunt each other and possibly harm guests.

During the design phase, Imagineers placed rocks, logs, trees, and hills between habitats to keep the animals separate. There are also chains on some of the roads to prevent animals from crossing, and the lions are even surrounded by a pit that is 18 feet deep and 21 feet wide to prevent them from jumping out of their area.

If an animal attempts to escape its area, it is usually moved to a more controlled area with well-defined boundaries like the savanna at Disney’s Animal Kingdom Lodge.

5. The safari is huge

Kilimanjaro Safaris is the largest attraction in any Disney Park. At 110 acres, the entire Magic Kingdom, which is only 107 acres, would fit inside.

4. The animals know their calling

Every night, the animals are moved from the safari to different areas that are safer at night. It’s a big undertaking to move all of the animals, but Disney has a system. Each animal responds to a call, and they know it’s time to move.

Cast Members use a triangle to call the hippos, drum beats to call the elephants, a cowbell for the giraffes, a sports whistle for the zebras, a horn for the hooved animals, and a duck call for the gazelles. Crocodiles are called in when a metal bar is struck under the water.

This prevents all of the animals coming in at the same time that could not only create a traffic jam but could have deadly consequences for some animals.

3. The trucks are custom

Talk about a custom ride! The GMC jeep-like vehicles used to travel through the safari are specially designed just for Disney and they cost $100,000 each! The 36-seat vehicle sits eight feet above the ground and runs on propane. The rider portion is mounted separately from the cab and is designed to provide a realistic bumpy ride through the savanna. The driver’s portion doesn’t bounce as much to reduce the strain on the driver’s body from driving through the safari all day.

2. Design took a while

Kilimanjaro Safaris opened in 1998, but Imagineers started designing the attraction two years before that. They laid concrete down for the roads and rolled truck tires through to make it look like mud. They even colored the concrete to look like clay. They also threw in sticks, rocks, and whatever else they could find that would make the road look authentic.

They also customized each animal’s habitat. For example, the lions would hide in the shade when they first arrived in Florida, so the Imagineers installed air-conditioning on their rock to encourage them to come out during the hot summer days. There is also heat for cool Florida winters, which lions don’t like either. There’s really no pleasing these large cats. I guess they’re not much different from our house cats.

1. It all started with Walt

As many of the attractions in Walt Disney World did, Kilimanjaro Safaris started with an idea from Walt Disney himself.

He originally wanted the animals in the Jungle Cruise in Magic Kingdom’s Adventureland to be real animals but later settled for animatronics due to the logistics.

When Disney decided to create Animal Kingdom and Kilimanjaro Safaris, they chose to relocate animals from zoos around the country rather than taking them from the wild. I think Walt would be happy to know that his park is home to real animals given an opportunity to enjoy the largest area in the world designed for captive animals rather than taking animals from the wild into captivity.

Are you a fan of Kilimanjaro Safaris?