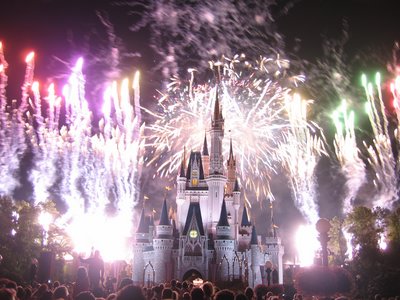 On both July 3 and July 4 you can see Disney’s Celebrate America! – A Fourth of July Concert in the Sky. The 15 minute show includes fireworks that fire off around the perimeter of the Magic Kingdom park, and includes more than 1,500 fireworks shells. Wikipedia estimates the show costs about $10,000. Music includes a great assortment of patriotic songs, including “God Bless America”, “America The Beautiful”, “This Land Is Your Land”, “Stars and Stripes Forever”, and a huge finale with “The Star-Spangled Banner”.

The Magic Kingdom will be packed – and it will take a long time to exit the park after the fireworks are over. If you aren’t into crowds or waits, consider viewing the fireworks from somewhere around Seven Seas Lagoon. I prefer the beach at Disney’s Polynesian Resort, but you can get a decent view at Disney’s Grand Floridian Resort and Spa too. Note that on July 4 Disney will force you to park at the Ticket & Transportation Center and to pay for that parking.

Epcot will present its normal nighttime spectacular, IllumiNations: Reflections of Earth, but will add a special new ending (called a “tag” by those in the know) called The Heartbeat of Freedom.

There are great viewing locations from the Sorcerer’s Hat back toward the park entrance along Hollywood Boulevard.